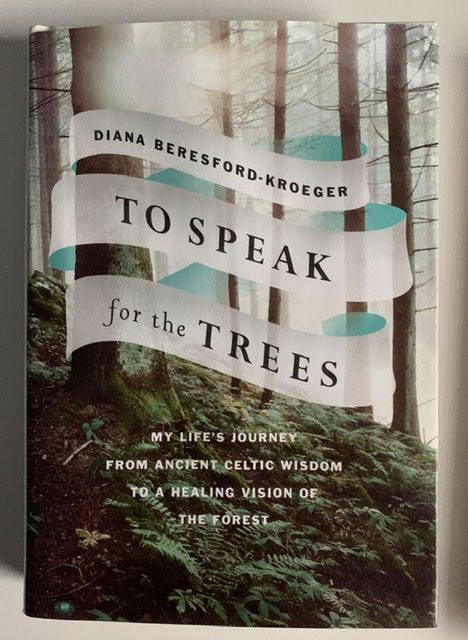 Diana Beresford-Kroeger invites readers into the world of trees and the ancient Celts in her new book To Speak for the Trees: My life’s journey from ancient Celtic wisdom to a healing vision of the forest.

The book is unique, in that it is part autobiography, part reference book. Diana starts by describing her childhood, growing up in Ireland.

Orphaned at a young age, she lived in constant fear of ending up in a Magdelene Laundry, an institution run by the Roman Catholic Church in Ireland. Originally meant to house prostitutes and unwed mothers, they were well known as hot beds of abuse and death at the time. Instead of going to the local laundry, Diana was put into the care of her uncle, where she still suffered years of neglect. Although he had stepped up for her in the courts, her uncle had no interest in caring for and raising a young girl.

What ultimately saved her, and began her life’s dedication to nature, and particularly trees, was born out of summers she spent in Lisheens. There she lived with her mother’s cousin and his mother who decided it was their duty to ensure she was brought up in the ancient Celtic tradition of Brehon Wardship, an arrangement where she would be taught by various people in the Lisheens community all she needed to know to take care of herself, as a young female growing into womanhood.

Through her lessons in Lisheens, she gained a deep understanding of the natural world. She was drawn to the majesty and beauty of the trees. With a sharp scientific mind, Diana took what she learned during her wardship and tested the knowledge in a formal academic setting, realizing that many of the natural medicines and remedies of the ancient Celts were still used in modern medicine. She also developed her global bioplan to combat climate change: a simple idea that we can use the natural power of trees to pull carbon from our atmosphere and bubble out oxygen in return. Her theory is that, if everyone on earth planted one tree per year for the next six years, we would be able to stop climate change in its tracks.

The second part of the book describes the Ogham script, the Celtic alphabet. Each letter was used to represent the name of a tree, and trees had many uses to the ancient Celts and Druids in medicine and daily life. This section gives the reader an understanding of the magical nature of trees and an appreciation for their importance to life on earth. From the barbed branches of the Blackberry, which bears a well-known immuneboosting fruit, to the majestic Oak with its many healing properties and acorns that have fed cultures all over the world, each species has its place in the natural order of the planet and carries the wisdom to heal it as well.

To Speak for the Trees blends the traditions of ancient cultures with scientific study: two worlds that are often at odds. Diana makes peace with this in a way that is as compelling as it is fascinating. This book is for anyone who is interested in the ancient history and culture of Ireland, the natural world, or just in the power of trees to sustain life on earth and their role in addressing cli- mate change. A page turner, To Speak to the Trees is a message of hope and a call for everyone to protect and save the world’s global forests, so they can in turn help to stop the climate change crisis that is threatening life on earth.