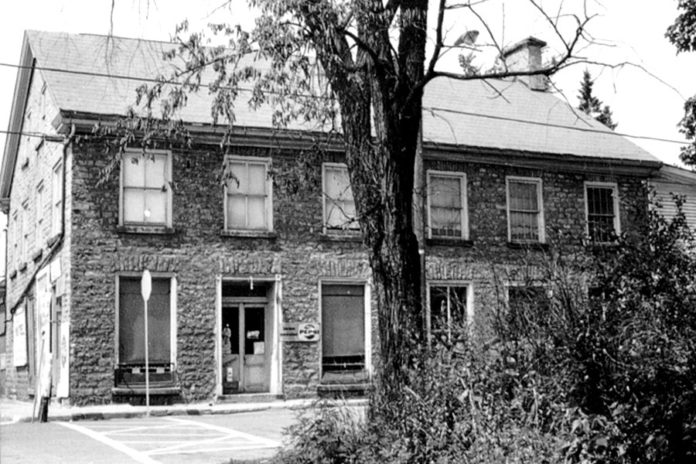 This building has a long and varied history. It was built by Francis Jones, a teacher and land surveyor whose family had moved here from Ireland around 1832.  He must have been either a very good surveyor, or a gambler, because he bought a lot of property around Kemptville in the 1840’s, before erecting this impressive and solid structure in 1847.

He had a number of tenants for much of the following fifteen years, including the first newspaper in Kemptville, the “Progressionist”, owned by R. W. Kelly, who brought in his printing press on the first train to arrive on the new line in 1854. But Kelly was encouraged to move his paper to Brockville in 1860, leaving Kemptville without a newspaper for a few years.

Another tenant was Joseph Leeming, who ran a general store there from 1855, introducing the cash system to the area, replacing the old barter system which had been the norm before that. Leeming was so successful in business that he moved his entire operation to Montreal in 1857.

But Jones had gambled too much, and his building was heavily mortgaged from 1854. He advertised a special raffle in Kelly’s paper in 1855 in which 104 prizes of stores, houses and lots were offered, worth around $8,400. This would be the equivalent of $250,000, a significant amount for Kemptville in 1855.

The draw may have helped Jones in the short term, but he continued to depend on loans, until he finally defaulted in 1864 and the property was taken and sold at a Sheriff’s auction. Later owners continued to find it difficult to maintain a business there during the next decades. But throughout the decades, various retail merchants were tenants there, carrying on business regardless of how the owners changed. In 1896, the property came into the hands of James McGregor and James L. P. Sanders, merchants of Kemptville. This time, the business prospered; so much so, in fact, that McGregor and Saunders had to expand across the road to a larger building (later known as Scobie’s). They still kept the Jones building in addition, and when McGregor died, his widow sold her share of the business to Sanders. The street running between the two stores was renamed from West Street to Sanders.

Sanders sold the business to James H. Brownlee in 1920, and it changed hands again in 1942, when it was bought by Max and Gitel Miller, who carried on the long tradition of retail business on the site. They had moved there after operating a general store and second-hand operation for nineteen years on the south side of town. Max Miller was Cantor for the local Jewish community, and in 1945 they rented a frame addition to the building for use by the Beth Israel Synagogue. [Visible to the right of the building] The congregation slowly dwindled over the years as the Jewish population aged or moved away, and, in 1984, the synagogue was closed and the frame addition removed.

The building was then bought by Michael Rowland, who operated the Rowland Leather business there until recently. Today, the building is still in use, and remains an active part of Kemptville’s commercial life, more than 170 years after Francis Jones took a gamble and built his impressive stone headquarters in 1847.