The news we reported last week, that the Ontario Government is cancelling the 50 Million Trees Program, has caused real concern in the community, as the Ferguson Forest Centre [FFC] has indicated that the cancellation could have a very negative effect on their future operations. Members of the public have been asking if there is a plan to protest the move, or any other way in which they can support the FFC.

An on-line petition has been set up to protest the cancellation, with a target of getting 50,000 signatures. As of last weekend, it had almost reached that number, with more than 43,000 names. The petition can be found at: www.change.org/p/doug-ford-rescind-the-order-to-cancel-the-funding-for-ontario-s-50-million-trees-program.

Wes Herring, Vice President of the Ferguson Forest Centre Corporation, commented to the Times: “At this time, the Ferguson Forest Centre is not planning any protests or campaigns to overturn this decision. We are communicating with other seedling growers and affected parties to find ways to best mitigate the impact of this cancellation, and are also looking at our operations and products to find the best way forward. Although this is a major hit to our program, the community should rest assured we will survive and will continue to provide seedlings, etc., for other programs and afforestation efforts in Eastern Ontario and Western Quebec, as well as, continue to support the North Grenville community with our forest trails, park lands, the dog park and other recreation spaces.

We hope that the many benefits of trees and forests – climate change mitigation, flood abatement and overall environmental health, to name just a few – will ultimately be recognized by our provincial government, and they will come to understand that investments in them are necessary.”

The FFC have been attempting to get more information from the government, but without much success. Ed Patchell, CEO of the Ferguson Tree Nursery, spoke to us about the interesting links between this decision by Ontario and the one made in 1995 by the Harris Government:

“It is interesting to know that before the Harris government shut down the nursery system in 1995 we were planting 25-30 million seedlings in southern Ontario and actually making improvements to the local ecologies (Limerick forest and LaRose forests are both the results of earlier programs), the 50 million tree program was intended to get those trees planted over a 20 year period and we were still losing ground to forest removal for agriculture and urban expansion.”

This community asset had survived other government cuts and short-sightedness. It will survive this too. 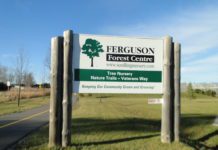 The Ferguson Forest Centre and its Tree Nursery Operations