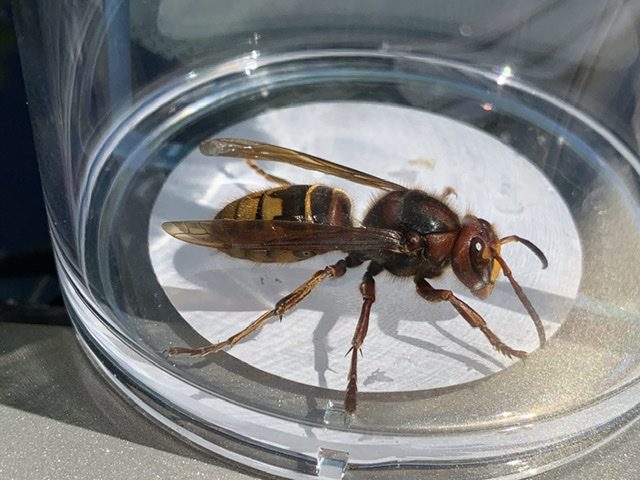 Giant Asian Hornets, Vespa mandarinia, have been getting a lot of attention from a few having been found in British Columbia and Washington state with the alarming English name of “Murder Hornets.” The nickname comes from their way of eliminating entire colonies of Honey Bees, and of killing humans with extremely painful stings when they interfere with the hornet colonies.

Ontario has been colonized by the related but less aggressive European Giant Hornet, Vespa crabro. This hornet is the European cousin of Vespa mandarinia, and it can be very tricky to differentiate between individuals of the two species.

While it’s extremely unlikely that the Asian Hornets will come east, the Canadian Council on Invasive Species says: “To help tell them apart, have a look at the abdominal segments. You will notice the Giant Asian Hornet colouring is more orange, red, and black, and the head has a redder hue. The European Giant Hornet is primarily yellow with black stripes. On the abdomen of the European Giant Hornet there is a black key hole looking marking on either side.”

We first saw the European Hornet as a queen in our sunporch in Bishops Mills on 28 May 2017, and then three more in 2018. In October 2019, Tom Graham & Jeanne Lambert down the road had one as a “huge waspish thing – uninvited visitor,” Joyce Cook had a few nearby in Wolford Township, and Matt Keevil & Amanda Bennett had one near Oxford Mills.

The photograph is a 29 mm queen from our porch a few days ago.
While we’ve only seen the European Hornets in the past few years, they were introduced to North America in the mid-19th century, and are widely established. They prefer to build their paper nests in dark places such as hollow tree trunks. In Germany they are a Species-at-Risk and there is a substantial fine for killing one.

Our native social wasps are quite different: The Baldface Hornet, Dolichovespula maculata, is smaller, black with a white face, and hangs its egg-shaped paper-sheathed nests on trees or buildings. Paper Wasps, Polistes, are brown and gracefully slender with narrow yellow rings on the edges of the abdominal segments, and build nests of open cells in sheltered places. The various Yellowjackets, Vespula, have black-&-yellow abdomens, and build paper nests in the ground or other holes (the smallest and most aggressive of these, Vespula germanica, is a relatively recent European introduction).

If anyone sees European Hornets, they can be reported to us at [email protected]. 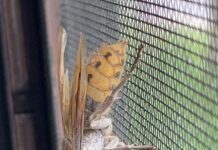 A Giant Buzzing Force in the Community