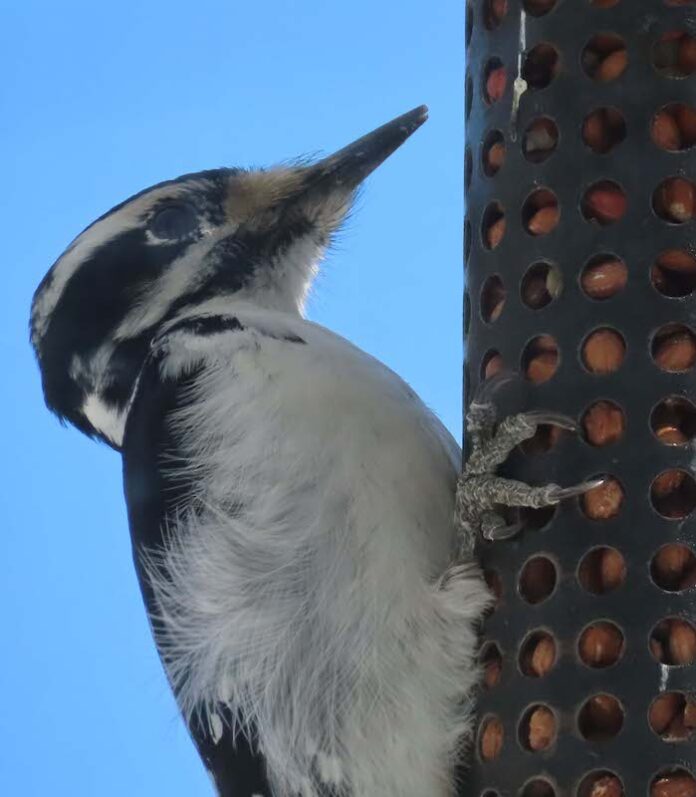 I became very aware of something the other evening that I thought was unusual. When still in the vicinity of one of the small local shopping malls, having just left a restaurant accompanied by a friend at about eleven o’clock: it was the raucous cawing of some crows! I was somewhat taken by surprise and happened to mention it to him, as we walked to our separate cars. He was as surprised as I was at hearing them too, so I have done some research on the matter, and have found out that it isn’t that much of an uncommon occurrence. Amazingly, I’ve never really heard them doing this, at least not at this time of the year, and certainly not in a built up area. They seemed to be sitting in some nearby pine trees located near some traffic lights.

Maybe it was these that disturbed them, or just the ambient light from the street lights confusing them into thinking it was still daytime. Being quite “social” birds, they may have been warning each other of some imminent danger, such as a cat, dog, or even that an Owl was in the vicinity. If this had been the case, unless it was a very large owl, the aggression would have been the other way round, and they would have been after it! The cawing that we were hearing didn’t seem to be that urgent, so whatever aroused them had probably disappeared and allowed them to settle back down again.

The continuing cold has brought our feeders into constant use, with all our regular birds visiting us on a daily basis, along with the squirrels. With the snowfalls occurring almost daily, the clearing of the paths to the feeders has become a regular chore. Fortunately, from that perspective, the snow has been very light and easily managed, up to now, and the lovely sunshine makes it almost a pleasure. (Wow! I must be getting “Cabin Fever!”). Today I got the picture of the Hairy Woodpecker, as she, too, enjoyed feeding in the sun, along with the Rock Pigeons, Juncos, Bluejays, Goldfinches, Mourning Doves, and — how could I forget them,– six Crows!? There are others too who pop in and out, so life around here still stays pretty interesting, as I hope your own feeders and gardens are for you. Enjoy and stay safe and well, 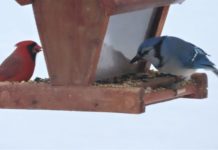 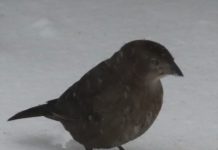