In 1974, James Pendergast of Merrickville was upbraided by fellow archaeologists for suggesting that an ash-rich pre-contact Iroquoian site in Glengarry County had been a sugaring camp. The objecting scholars said that, since without iron pots boiling sap down to sugar was impossible, the boiling of Maple sap must have been a post-contact invention. Pendergast combed the reports of the earliest French explorers for accounts of interactions with sap and sugar. He noted that each indigenous language had their own words for the process, documented the feasibility of boiling in pottery and bark vessels, and collected all the early accounts of origin stories that he could find. He also trolled the European literature and showed that before North American sugaring was reported, Europeans had no idea about the sweetness of Maple sap, and that there was a bit of an European sugaring craze once they’d learned of it. I was startled by this transatlantic conundrum as a teenager, when the headmaster of my school was successfully tapping the Norway Maples on the campus, since at that point I thought only Sugar Maples had usable sap.

Freezing concentrates the sugar just as well as boiling – when we don’t have time to boil, we put buckets in the freezer and remove the ice. Before metal pots were introduced, First Nations folk concentrated sap by pouring it into shallow bark trays and exposing it to the sky on cold nights, then removing the ice. The neighbour who taught us about freezing sap has a story about an old fellow who used to help her, who spent one whole day grumbling about all the sap ice she’d thrown away after a cold night, and then was amazed at how quickly it had boiled down to syrup.

The problem with Pendergast’s retrieval of early French accounts of sugaring was that there was no mention of solid sugar. Early explorers were offered “…a sweet and very pleasant liquor,” “…a juice, sweet as honey or as sugar”, and “a beverage… the colour of Spanish wine… [with] a sweetness which renders it of very good taste,” which they called sap, but which must have been considerably concentrated.

In 1989, Patrick J. Munson experimented with aboriginal technology and reevaluated vocabularies, oral traditions, and early historic documents to conclude that while maple syrup was produced prehistorically, maple sugar was not made before the introduction of metal kettles. He suggests that because sap runs in “hungry months” before other foods were available, syrup production might have been a sporadic activity, carried out mostly in years when stored foods were inadequate, so that the earliest Europeans would have had few opportunities to observe it. One of the methods of boiling was putting hot rocks from a fire into the liquid, and he found that while this would make syrup, the syrup caramelized and charred on the rocks before it reached the point of being sugar. The higher temperatures of boiling to reach sugar would have stressed bark and pottery containers, and if the sugar is to be granular, it must be stirred and scraped in a way that would have been difficult in aboriginal vessels.

How was it learned that sap was a sweet? Only when we know it to be sweet, do we deliberately taste the evaporated drips from broken twigs that fall onto our parked car. In many of the origin stories that Pendergast assembled, it is told that the sap had been very sweet at first and then became realistically dilute, as a characteristic folk-tale punishment, such as this Menominee legend collected in 1891:

“One day Nokomis, the grandmother of Manabush was in the forest and accidentally cut the bark of a tree. Seeing that a thick syrup exuded from the cut, she put her finger to the substance, and upon tasting it found it to be very sweet and agreeable. She then gave some of it to her grandson, Manabush, who liked it very much, but thought that if the syrup ran from the trees in such a state it would cause idleness among women. He then told Nakomis that in order to give his aunts employment and keep them from idleness he would dilute the thick sap whereupon he took a vessel of water and poured it over the tops of the trees, and thus reduced the sap to its present consistency.”

But why did Europeans not notice this sweetness? When you’re asking about differences between Eurasia and North America, it’s often helpful to consider our feisty and dynamic Red Squirrel, Tamiasciurus hudsonicus. Many of the trees we tap are young and have wide low branches, on which we often see little cuts in the bark, with sap running down from them. New England biologist Bernd Heinrich noticed these cuts in a mixed stand of young hardwoods in western Maine, and showed that they were bites made by Red Squirrels. He calculated that it would not have benefited the Squirrels’ metabolism to drink the dilute unevaporated sap, and found that the squirrels came back later to lick up the sticky drips after most of the water had evaporated.

So when you’re in the bush gathering sap, and Red Squirrels are lashing their tails and swearing at you, remember that they’re the originators of your art… and then, if you’re using plastic sap tubing and plastic spiles, you can swear back at them for the way they’ve bitten holes in your equipment. 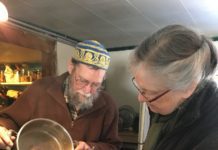