It seems that the speculation about the future of Kemptville College will not be easily stopped. In spite of continual reassurances from municipal staff and politicians, there are still those in North Grenville and beyond who are absolutely convinced that the College land is about to be disposed of to the highest bidding developer.

In the most recent edition of the Farmers Forum on-line, one of the leading stories is, once again, about the real content of the BDO Report on the future of the campus. With the title: “What to do with Kemptville College? Here’s the report”, the Forum implies, yet again, that they have the full BDO Report, and that it contains definite indications that certain lands at the College are “surplus”, and therefore open for sale.

However, as has been pointed out again and again, what they are calling the full BDO Report is, in fact, only the power point presentation given to Council when the full report was completed. It is a 32-slide summary of the main Report and does not even contain all the details contained in the edited version released by the Municipality. In an interview with Mayor David Gordon, and in conversation with CAO Brian Carré, the Forum was told quite clearly that the term “surplus lands” did not mean that they were unneeded or unwanted. As the CAO told the Times: “This is definitely not the complete BDO report but rather the slide deck that was presented at a Council meeting open to the public. The reference to surplus lands simply speaks to the fact that these lands are vacant and surplus to the Campus operations”.

David Gordon told the Forum, in his usual style, that any sale of College lands would be “over his dead body”. So why is this conviction still out there that there is a nefarious conspiracy to carve up the College.

Brian Carré believes it is a determined campaign to undermine the Municipality’s plans. “The Farmers Forum has printed an unbalanced article based on the views of the Alumni Association and its President who has attempted to discredit the Municipality’s efforts since day one”.

Now, there are two ways of viewing this. Either the Mayor and the CAO are misleading the community, or they are sincere in their statements. There is nothing in either man’s record to justify the former explanation, and any future sale of College lands would shred their personal and professional credibility. Without question: if their statements prove to be deliberately misleading, they would be crucified, to put it mildly. They may be sincere and still, of course, a future Council might change policy and move towards a sale of lands. But that is not what the speculation is suggesting.

The speculation might be silenced if the full BDO Report was released, instead of the edited version we have now. That may happen some day, but it is not helping things to keep it secret now. The fact that, to date, the only tenants for this centre for climate change mitigation research facility are two schools does nothing to inspire confidence in the Municipality’s handling of the project. No matter how many classes these elementary and high school students get in climate change and environmental issues, it hardly meets the claims of what the College is about to become.

There has been a lot, perhaps too much, secretive activity in the Municipal Centre over the last year. The departure of the Treasurer, the planning for the College, the failure to consult with the public and stakeholders before staff reports are presented to Council, the litigation arising from the Kemptville Meadows fiasco, and the handling of the vacancy on Council and how to fill it; all these have given fuel to the fire of those who are convinced that there is “something going on” that we need to know about. It is interesting to note that the Ontario Ombudsman’s office has received 1,255 complaints about municipalities since January 1. If people have a genuine complaint or grievance about the workings of our municipality, there is now an official and neutral process for dealing with it.

Let’s be thankful that, whatever we think about the way things are done in North Grenville, we can still look with amazement at other jurisdictions. We had quite a fuss about replacing a retired Councillor here, and there was much debate about the best way to fill the vacancy. The debate has resulted in a new bylaw laying down the process for filling future vacancies. They have to be better than the one chosen by the Township of Billings, on Manitoulin Island, where, in a closed session, council tossed a coin to choose a new councillor. The Ombudsman decided that this constituted an illegal closed meeting.

In the past four weeks, our Council has held three closed meetings to discuss the Kemptville Meadows debacle (see the article in this issue). In my personal opinion (should anyone be interested in such a thing), I have no doubts about the integrity of Brian Carré, David Gordon and at least most of our Councillors. But it would be a lot better if they kept to their election promises to be more transparent, more open, with more consultation with the public before decisions are made. It might stop a lot of the speculation. 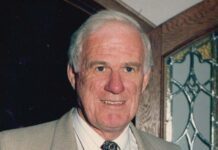