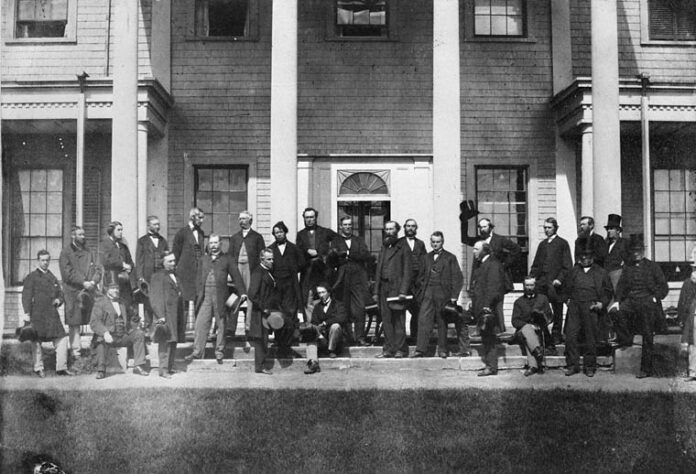 It is probably fair to assume that most Canadians have heard of the Charlottetown Conference and its role in bringing about the Confederation of the British American Provinces into the country we know as Canada. Perhaps it is the famous photograph that was taken of the delegates in September, 1864, standing outside Government House that has made the Conference so closely associated with Confederation in peoples’ minds. However, although the weeks spent together in PEI certainly laid the foundations for Confederation, it was not necessarily the pivotal event we sometimes imagine.

No documents came out of the meetings, no records kept, and no resolutions passed. The actual conference was meant to discuss Maritime Union, a new Acadia where New Brunswick, Nova Scotia and PEI would form a single Province, as they had been before the beginning of the nineteenth century. The Canadian delegation had, as some Maritime newspapers angrily stated, “invited themselves to the Conference!”

The gathering did not begin well. The Canadians arrived on their steamer, the Queen Victoria, to be met by the Provincial Secretary of PEI in a rowboat. There was a circus in town and it seems no-one higher up in the government thought the arrival of the delegates required their presence. Nevertheless, the Canadians transferred from the steamer to the ship’s boats and moved grandly, with uniformed escorts, to the pier, before finding accommodations here and there throughout Charlottetown. The crowds arriving for the circus had taken most of the available hotel rooms in the town.

No minutes were kept of the proceedings, so we only have the most general information about what happened in Government House. When the Conference gathered, the Canadians were left in the public gallery, while the Maritimers officially opened the meetings, appointed a Chair, and then invited the visitors to join them and make their presentations. That was the last notice anyone paid to Maritime Union. For the next four days, the senior Canadian delegates, John A. Macdonald, George Etienne Cartier, Alexander Galt and George Brown, took turns in addressing the various aspects of a British American Union. Macdonald and Cartier dealt with the need for such a union in the face of economic, political and international circumstances. “Stronger Together” would have been their motto.

Galt discussed the financial aspects, indicating that the new federal government would take over all provincial debts and make payments to the provinces based on population. Brown handled the constitutional structures that could be put in place in whatever federal system would be agreed upon. All of these ideas and proposals had come out of the many meetings and debates the Canadians had carried on since Brown’s Committee formed in May. Since they had formed their Great Coalition in June, they had spent much of the weeks since preparing these presentations being made in Charlottetown.

The Maritimers did not have the same background of preparation as the Canadians, and were, apparently, quite impressed, not only by the specific proposals, but by the grand vision of Confederation. The idea that they could all be part of a great new nation, stretching from Atlantic to Pacific, certainly took hold of their imaginations. The Canadians spoke of railways, the Intercolonial linking New Brunswick to the Grand Trunk in Canada, and the railway that would be built between Fort William and the British Columbia coast. Exciting and appealing to men who were acutely aware of the limited scope for endeavour offered by their current situation.

And, of course, every afternoon of those September days, after the Canadian presentations, there would be receptions, parties, dances and official events at which they could get to know each other and forge those bonds that would, in many cases, last for the rest of their lives. The Conference adjourned to meet in Halifax the following day, then scheduled a second round to be held in Quebec City on October 10. Before parting, at one of the many social gatherings, this time on the Canadians ship, the atmosphere of fellowship (enhanced by large quantities of champagne) led to them announcing that the banns had been read for the marriage of British America, and the Provinces were declared formally engaged.

The twenty-three men who met at Charlottetown that September had, indeed, begun a process that had far-reaching effects, though, as yet, there were no official documents, no resolutions passed, no signatures committing them to anything. But the first steps had been taken, in a way that possibly surprised even them, to bring together these provinces with their separate identities and histories. The next steps would be taken in Quebec, and that would mean getting into details, details on which they might not have the same sense of fellowship and unity.