The Defense of Hong Kong against the Japanese forces in December, 1941 was the first time Canadians found themselves in action in the Second World War, but many feel they should never have been there in the first place. North Grenville veteran and publisher, Terry Meagher, has published a book on the story, working with three retired and experienced military men: Major-General Ivan Fenton, Lieutenant-Colonel Nick Ward, and Major Bill Wiseman. Their book, “Betrayal: Canadian soldiers in Hong Kong, 1941″, is a shocking and a sobering account of how British authorities used and misused Canadian, Indian and Chinese soldiers in defending a colony they thought could not be saved from Japanese capture.

Recently, Terry Meagher and his wife, Marina, together with Nick Ward, spoke to the NATO group at the Kemptville Legion about the events covered in their book. Terry is himself a veteran of the Korean War, and the founder of the publishing company, Veterans Publications, based in Kemptville. The talk at the Legion was moving, detailed and quite a revelation to those who had never heard about those awful weeks in 1941.

caption: Terry Meagher and his wife, Marina, together with Nick Ward, spoke to the NATO group at the Kemptville Legion about the events covered in their book.

The Canadian contingent in Hong Kong was made up of the Royal Rifles of Canada and the Winnipeg Grenadiers, a total of 1,975 soldiers, sent by the Canadian Government, even though most were not trained for combat roles. There were questions over the loyalty and commitment of the Chinese soldiers, and, although the officers commanding the Indian troops were dependable, many of the rank and file were bitter about the imperialist arrogance with which they were treated by the British leadership. Sikhs had been told to wear steel helmets instead of their turbans, and some were led in chains for refusing the order. It was not, in short, a strong and unified command that faced the Japanese when they attacked the colony on December 8, 1941.

In spite of incredible bravery and stubborn resistance, the battle was over by Christmas Day, when the colony surrendered. Almost 300 Canadian soldiers were killed in the fighting, and about 500 wounded. The dying did not end with the surrender, however, and the treatment met with in the prison camps killed at least a further 264 Canadians. In all, more than 1,050 of the original 1,975 sent to Hong Kong were either killed or wounded, a casualty rate of more than 50%.

A commission of inquiry set up by the Canadian Government at the time found no fault with the Government, the Cabinet or the Defense Department, in spite of clear evidence of what Terry Meagher simply calls “betrayal”.  A later investigation did find that there were questions to answer, but no-one has ever answered for the misuse of Canadians in defending a colony the British Government considered expendable. 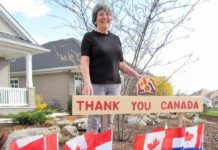 Thank you Canada from the Netherlands