The revolution, which was to change Oxford-on-Rideau and South Gower Townships forever, began very quietly indeed. It happened in the House of Assembly in Toronto on August 10, 1850, when an Act was passed incorporating “a Company to construct a Railroad between Bytown and Prescott”. The new corporation, which would be called The Bytown and Prescott Railway Company, was set up by businessmen from the two named towns, primarily, who saw tremendous possibilities in a railway line linking the Ottawa and St. Lawrence rivers, by which timber, minerals and agriculture produce from the Ottawa Valley and eastern Quebec could be shipped to Montreal and the United States markets quickly and cheaply. The move to build this railway had been given a huge boost by the completion of the Ogdensburg railway the previous month.

For the previous thirty years, the Rideau Canal had been the main transportation route for these products: but railway fever was beginning to catch on in the Canadas, and the advantages of rail over water were becoming clear to visionary entrepreneurs. The big question was: what would be the route of the new railway line? For on this decision would rest the future prosperity, or ruin, of the towns and hamlets either served, or bypassed, by the tracks. The Directors of the company hired Walter Shanly, an Irish engineer who had supervised the building of the Ogdensburg railway, to survey the route for their line, and Shanly spent the first three months of 1851 walking four separate proposed routes between Bytown and Prescott, an amazing feat in those winter months.

Two of the four proposed routes went through Oxford-on-Rideau Township, and the other two crossed South Gower, but the precise lines were very different in each case. The Western Route crossed the Rideau near Beckett’s landing and passed just west of Kemptville, then straight through the township, crossing into Edwardsburg at lot 21. The Middle Route went through South Gower, passing just half a mile from Heckston, but far to the east of Kemptville. This was the closest to a direct route Shanly could find, but it also meant the railway would have to cross the Rideau River three times before it even got to South Gower.

The Eastern, or Heck’s Corners Route, came through Mountain Township into South Gower and “close on the West of Heck’s Corners” [Heckston], leaving Kemptville five miles away to the west. Shanly’s recommendation was for the fourth route, “the Kemptville Route, (East of the Rideau)…the most feasible plan of constructing the proposed Railway so as to touch Kemptville without interfering with the Rideau Canal…taking a direct line to Kemptville, to fall in with the Western Route on the South of, without crossing, the South Branch of the Rideau. From which point the Western Route should be followed to Prescott”.

It was a decision which would alter the fortunes of both Heckston and Kemptville forever. Heckston had once been the major centre, the overnight stopping point for coaches travelling between Bytown and the St. Lawrence. It had lost out badly when the Rideau Canal had made Kemptville the more accessible centre, but the coming of the railway could have reversed their situation once again. It was not to be. Shanly’s reasons for preferring Kemptville, even though it added two miles to the length of the route, were cogent: “A Station on the Rideau Canal, at a point so central to the Line as Kemptville, would doubtless present some advantages,—-giving you a water communication with several rich and productive Townships to the West, and rendering the Canal in a measure tributary, instead of rival, to your interests”.

On April 7, 1851, the Directors of the Bytown and Prescott Railway Company decided to accept Shanly’s recommendation, and the Kemptville Route was chosen. There were immediate, as well as long-term, effects of this decision in all of what is now North Grenville. For South Gower, and Heckston in particular, it marked an economic and social revolution from which it never recovered. First the canal, now the railway, and, later, the highway would bypass the township and Kemptville became the focus for all of its economic and commercial activities.

Kemptville itself would be completely changed by the coming of the railway. It brought prosperity, a growing population, a booming economy, and made the small village the focus of, not just Oxford and South Gower, but the municipalities surrounding it too. But that raised new and unpleasant issues also. Within a decade, Kemptville had separated from Oxford-on-Rideau and established itself as a separate Corporation, self-governing and ready to take advantage of the benefits that came with the first steam engine that puffed into town in August, 1854. Ironically, the engine was named “Oxford”. 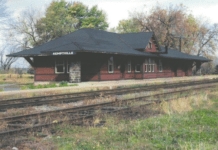 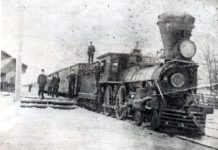