The arrival of the first train at the new station in Kemptville in August, 1854, appeared to signal the new era of railway travel that would bring prosperity and dynamism to the Canadas. The Bytown and Prescott Railway Company was one of the first such enterprises in Canada, following a boom in railway construction in Britain during the previous decades. It had been just twenty years since the first regular passenger service ever had been established in England, and just six years since a standard gauge for railway tracks had been introduced. The Bytown & Prescott seemed to be on the cutting edge of railway building when it incorporated in 1850.

But appearances were deceptive. Being one of the first examples of a new technology had its risks, and the company soon found itself running out of money, as new investors were hard to find. The original shareholders had, naturally, been mostly businessmen from Bytown, with a few from Prescott; men who saw the potential in a cheap and quick means of transporting their merchandise to American and overseas markets. But Bytown was not yet Ottawa, and there were simply too few individuals with enough capital to finance a railway. And

it was this need for investors that brought Kemptville into the picture. As we saw last time, Walter Shanly had identified Kemptville as the best location for the railway’s link with the traffic provided by the Rideau Canal, so it seemed logical to look to local businessmen there to help fund the project.

Just two months after incorporating, the company had opened offices in Bytown, Prescott, Ogdensburgh and Kemptville where interested investors could attend to “become Subscribers to the said undertaking”. It was not only individual entrepreneurs who were approached to subscriber, however. The various municipalities most affected by the coming railway were also invited to take shares in the enterprise. The Township of Oxford-on-Rideau contributed the large sum (in the 1850’s) of £6,000, or $24,000 at that time. In today’s money, that amounts to more than $1 million. This was almost matched by private investors in the village of Kemptville, who provided £5,170 (or $20,680), another $1 million. These are very large sums of money to come out of a small rural area, and says a great deal about the local economy in Oxford-on-Rideau at the time. It also indicates the optimism which existed regarding the potential value of the railway. But the subscriptions pale in comparison to the estimated cost of building the railway, which was calculated at £252,055.00 (about $12 million in today’s money).

Three years later, as the work was underway on the actual construction of the route, a further application had to be made for funding. Investors were reassured that such a venture could not fail to make a sizeable profit, and encouraged municipalities to invest yet further in this guaranteed money-maker. The large investment made by Oxford residents in the company had resulted in a number of them being appointed to the Board of Directors, and the new company President was Robert Bell.

He had been born in Ireland, in 1821, and his family moving to Oxford-on-Rideau Township in 1832, farming 100 acres on lot 22, concession 6, off what is now Beach Road. He qualified as a Provincial Land Surveyor, and moved to Bytown to pursue a career in surveying. Although he had a successful business in that field, he became more interested in journalism, and, in 1849 he purchased the Bytown Packet, a popular local newspaper. In February, 1851, the newspaper became known as the Ottawa Citizen.

Robert become secretary of the provisional committee of the railway company when it first began in 1850, and was a natural choice to be President, the link between the Bytown and Kemptville investors. It is said that Robert Bell, more than anyone else, was responsible for overseeing the completion of the line and he remained president of the company for many years.

In spite of the financial uncertainty, the Bytown & Prescott reached from Prescott Kemptville and work on the line took a break, while the rest of the route to Bytown was prepared. 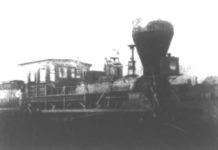