Some people may have noticed smoke billowing up into the sky from the north on County Road 44 between April 19 and 20. Not to worry, not only was the North Grenville Fire Service there to put out the fires, but they were also the ones that were setting them. Yes, you read that right.

The North Grenville Fire Service, in conjunction with the Ontario Fire Marshal and the Eastern Ontario Association of Fire Investigators, was conducting a series of fire investigation training sessions at an abandoned building located at 114 County Road 44. Previously known as the Evergreen Motel, the property was the site of a unique training exercise for over 100 firefighters across Eastern Ontario. The exercise also included insurance company employees, media, and police officers from various forces across Eastern Ontario.

The training involved a series of planned, live burns with different ignition sources which allowed firefighters to see how the various sources burned and allowed them to practice their investigation techniques. Smoke was very visible as a result of the live burns, but the public were asked to not call in reports of smoke at this site during the training and to keep clear of the area for the two days.

Being the hosts for the exercise, the NGFS volunteer firefighters were tasked with both lighting the fires themselves and providing the resources to also put the fires out after the allotted time. One particular demonstration was of a mattress that was placed vertically and ignited. It demonstrated, shockingly, how quickly a mattress fire could spread. It also showed that even after the fire was believed out, the mattress caught fire again, as it appeared it may have still been burning on the back side out of view.

In front of the structure, some distance back, there were tables set up to demonstrate the effects that different kinds of lit cigarettes can have on common materials found around residential properties, like dried grass and sawdust, among others. It also showed that, for some materials, a lit cigarette may not cause a fire immediately, but rather take a few minutes or longer to get started. Another demonstration showed what happens to different types of clothing when they catch fire. Materials like polyester, for example, don’t burn, but instead will melt very quickly and are still capable of spreading a fire.

The location (beside the Long Reach Restaurant) appeared to be an excellent choice, as the Evergreen Motel has been unused for a long time and sits in a natural hollow in the ground, so that it provided an almost stadium-like viewing area for all of the participants and observers.

The NGFS stated that there will be some follow up training at the site during May and June, but the plan is to have the site cleaned up and levelled some time in July.

The NGFS is currently without a Fire Chief, but the search is ongoing and the municipality has already received a number of applications. Until a new Chief is hired, Deputy Chief Randy Urslak continues to fill in as the acting chief. 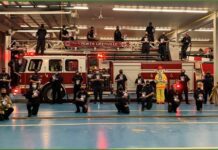 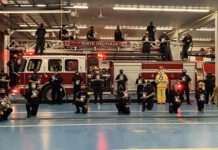 Time to change the batteries