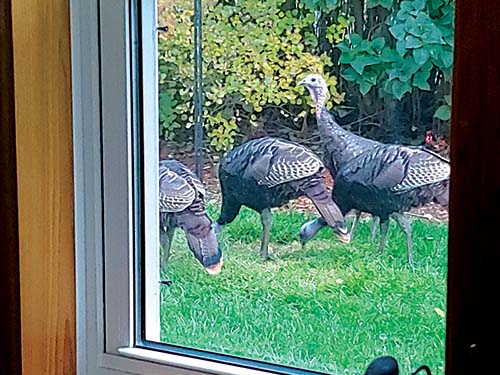 I was interested to read an article about ‘our’ turkey and that it has been given a name and has reached celebrity status on Facebook which I don’t subscribe to. We have watched the hen turkey on our property for over a year; she was originally from a family of seven turkeys who visited our property two years ago. Then last spring she was on her own but later showed up with six chicks in June. By September there only three which grew to be as large as her before leaving in October. She continued coming here almost daily but now has expanded her territory to all around Kemptville while still making the occasional visits to underneath our bird feeders looking for food. It’s amazing she hasn’t been hit by a vehicle as she spends a lot of time on the road shoulders and occasionally holding up traffic in the middle of the road. Must be one tough old bird but a lonely one.