By Bob Cox, Publisher, Winnipeg Free Press, and Chair of the Board of News Media Canada

It is common these days to find news outlets that run features under headlines like: “A look at what didn’t happen this week.”

Journalism never used to worry about what didn’t happen. Airplanes that landed safely—and didn’t crash—never made the news.

But we live in the age of Fake News, with the reality that false information spreads quickly around the world, causing damage that ranges from disrupting democratic elections to tarnishing the reputations of countless innocent individuals.

It has reminded us that in-depth, credible, independent reporting done by trusted news sources is more important than ever.

We have a job to do. A small part of that job is fighting Fake News by revealing the truth. No, Justin Timberlake did not say pedophiles control the music industry and no, Canada does not impose a 35% tariff on vacuum cleaners from the United States, as some supporters of U.S. President Donald Trump have claimed.

The biggest part of the job is to be your trusted source, to work every day to bring you real news, which is as vital to democracy as clean air, safe streets, good schools and public health.

It isn’t getting any easier. To misquote Mark Twain, reports of the death of newspapers are greatly exaggerated. But the business of bringing you the news—in print, on your phone, your tablet or your desktop computer—is challenged as it has never been before.

In the digital age, our audiences are larger than ever. There is a steady desire for news and information. But paying for it—maintaining the strong newsrooms that tell the stories of our communities—is harder and harder.

We are seeking new business models that can continue to do the hard work of independent journalism across Canada—and asking for your help to secure a future in which real news remains strong.

During National Newspaper Week 2018, we’re asking you to show your support for the Canadian news media industry.

Let’s send a message—to businesses, to government, to journalists across Canada—that newspapers matter. Now more than ever. Pledge your support at www.newspapersmatter.ca.

I read the news today

Newspapers Matter – Now More Than Ever 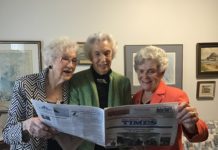