The most senior member of the Merrickville Artists Guild (MAG) is having an art show and sale at the beginning of August featuring over 80 original sculptures. Pieter Doef has been creating art for as long as he can remember. Born in 1927 in Andyk, Holland, Pieter says he started drawing on the edges of newspapers at the age of three or four. All throughout his school years he continued to draw and express himself creatively, including using clay to make small sculptures. In 1947, he was drafted into the marines and sent to Indonesia as part of the Dutch attempt to get the Japanese out of the country after World War 2. When he returned home, he met his wife, Wilhelmina, and they immigrated to Canada because there was nowhere for a young couple to live in Holland, due to the devastation of the war. They arrived in Smiths Falls in 1950, and Pieter got a job on a mink farm, carrying on the tradition of farming that he knew well from his days working with his father on their tulip farm in Holland.

Even throughout his days in the marines and in the farming community, Pieter continued to create art in his spare time. Eventually, he got a job doing art therapy at what was known in those days as the Ontario Hospital School (Rideau Regional Centre) for people with mental and physical disabilities. “They knew that I could paint, so they gave me a job,” he remembers. “I love kids, I love art, so it went together.”

Pieter stayed in his position at the Rideau Regional Centre for 30 years, all the while continuing with his art on the side. While all the other staff members were having coffee or smoke breaks between classes, he would stay in the classroom, sketching and creating. “Drawing and art is the only thing I had interest in,” he says. Pieter is predominantly self taught, but took some classes at the Ottawa School of Art in the 1960s under Canadian sculptor Victor Tolgesy. “I had models and learned how to make sculptures from human bodies,” he remembers. “I learned new techniques.”

In 1966, Pieter and Wilhelmina moved from Smiths Falls and bought a home in Easton’s Corners. In 1974, they moved to their 200-acre farm in Merrickville, where there was space for a designated workshop, studio, and his now large family. Pieter became an integral part of the artist community in Merrickville, and was one of the founding members of MAG in 1984. He has also kept close ties to the Smiths Falls community by designing an 18-foot steel sculpture in Rotary Club Park, and an 8 by 24-foot mural for the Smiths Falls District Hospital.

During his career, Pieter also did a small stint teaching art at Smiths Falls District High School, where he was an inspiration for many students studying art. One of them, Ian Wallace, became an illustrator and created a children’s book in his honour.

When Pieter retired from the Rideau Regional Centre, he became dedicated to his art full time. “I retired, but then I had seven days to work in,” he says. “I don’t know how to stop.” Now 93, his house is filled with thousands of paintings and sketches, and over 80 sculptures are displayed throughout his property. It is clear from his work that Pieter is inspired by florals, as well as the human form. “The human body is a cosmic creation,” he says. “It is perfect.”

Pieter will be holding an art and sculpture sale at his studio at 698 McCrea Road on Sunday, August 9. His daughter, Maria, and granddaughter, Batina, are organizing it, and will be ensuring that everything is laid out so that people can come see Pieter’s work while still maintaining physical distancing. Batina has also created a Facebook page under Artwork of Peiter Doef, to promote the sale and showcase Pieter’s paintings and sculptures.

Pieter is an artist that has truly dedicated his life to his work. Even in his 90s, he is constantly creating and using art to help him make sense of the world around him. His creativity runs deep in his veins, and is something that he doesn’t quite have control over. This is apparent in a phrase that he wrote on the wall of his large studio (much to his late wife’s chagrin): “To paint is a pain, and not to paint is death.” 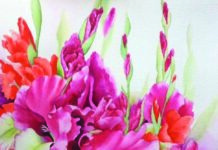 Art Show and Sale this weekend