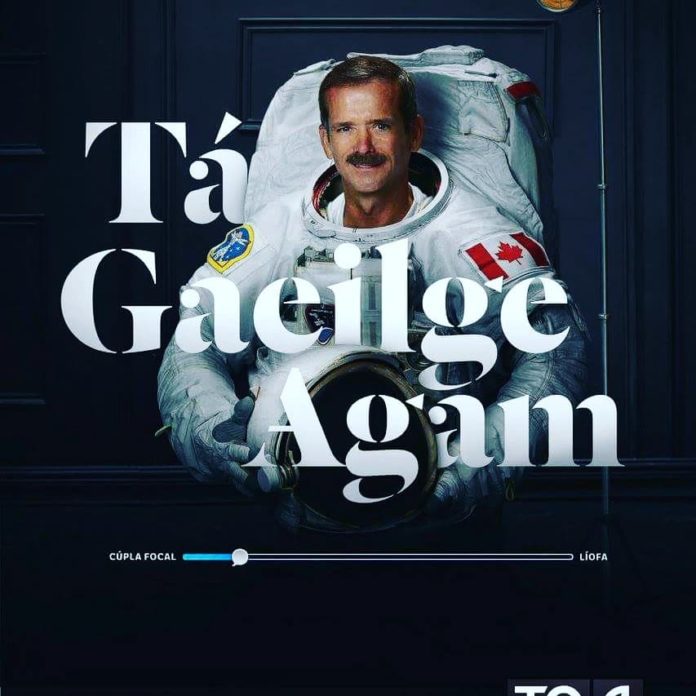 Dublin, in fact all of Ireland, is suffering from the second heatwave in a month. So, as I strolled happily down the street one day during the week, I thought the heat was causing me to have visions and mirages. There, on a poster ad on a bus shelter, was a photograph of Canadian astronaut, Chris Hadfield in his full space suit garb. Nothing terribly unusual there, perhaps, but the words on the poster read: “Tá Gaeilge Agam”, which, translated, means: “ I speak Irish”.

That got me confused. Was some company misusing the Canadian’s image to advertise their goods illegally? Why would he be appearing on Dublin bus advertising claiming to speak the Irish language? Honestly, the things you see on Dublin streets!

In fact, the advertisement was part of a new campaign to encourage people to use whatever level of Irish they had, as the Irish language has been in decline for some time.

Canadians will remember the wonderful broadcasts Chris had made from space during his time on the International Space Station in 2013, culminating in his singing David Bowie’s song, “Space Oddity” to a worldwide audience.

Earlier in his sojourn, he had also posted photographs of various cities around the world, taken at night from the Space Station. Among these was a picture of Dublin, to which he added the tweet: “Tá Éire fiorálainn! Land of green hills and dark beer. With capital Dublin glowing in the Irish night”.

This got people asking: where did he learn the Irish phrases? There was so much positive response from Irish supporters that he tweeted: “Wow, I can feel the warmth of the Irish all the way up here – go raibh maith agaibh! I’ll do my best to photo more cities as clouds clear.” It was, as they say, the start of a beautiful friendship. Chris later explained the Irish language connection: “I’ve always had an interest in Ireland and Irish culture; hence my tweet As Gaeilge from space. My daughter Kristin studied for her PhD at Trinity College and my niece Kelly is currently studying at the UL medical school so I have something of a love affair with this place”.

Soon after returning from his time on the International Space Station, Chris visited his family in Ireland and was warmly received wherever he went. So much so, in fact, that he was named as an ambassador for Irish tourism in 2014, and has since made a number of promotional videos, called An Astronaut’s Guide To The Island Of Ireland.

Irish Taoiseach (Prime Minister) Leo Varadkar, pointed out that the Canadian was especially qualified to promote the country: “Chris Hadfield is one of the few people on earth who has seen Ireland from space, and on the ground. ” So, the “Tá Gaeilge Agam” poster was not a case of fraudulent advertising, nor was it a mirage in the heat of a Dublin street.

Commander Chris Hadfield, Canadian astronaut, Irish tourism ambassador, and international singing sensation, does really speak the Irish language to some extent. What a very strange connection between the two nations.