For over 200 moons, Shiikenh-baa – he loved to see the reaction of hotel clerks when he checked in by drawing a little turtle symbol – was the “eminence grise” of Anishinabek politics. Chiefs and Grand Chiefs – even member communities – came and went, but Gordon-baa was a constant presence at the assemblies and conferences convened to conduct the Nation’s business, from Lake Nipigon in the north, to Golden Lake in the east, and to the southern shores of Lake Huron.

From the time he decided to accept the role as Getzit for the Nation’s Leadership Council, he made his vision clear about the importance of providing strong cultural underpinning to Indigenous political activism.  His contributions to the immense task of restoring Anishinaabe governance would never come in the form of what he liked to call “drive-by spirituality”.

When asked to open a meeting, participants learned to be prepared for much more than a perfunctory “prayer” or predictable smudge; they knew they were in for a teaching.

That was how many elected leaders first learned about the role that the Dodemaag (Clan) System had played for the Anishinabek since time immemorial. He understood that First Nations had used this model of community governance for thousands of generations before Europeans came to understand the importance of grooming leaders to understand their true purpose in life.

He encouraged everyone with whom he came into contact to explore their family tree and find their Clan affiliation, understanding how important it is to know where we come from to help us get to where we need to go.

His teaching and encouragement led to the landmark decision of Anishinabek Nation chiefs – and later Chiefs of Ontario – to adopt the traditional “stand-up” format to select their Grand Chiefs. Having the courage to stand in open assembly behind one’s political choice for a leader was a major departure from using the secret-ballot elections imposed by Canadian colonizers on First Nations through the repressive Indian Act.

When Anishinabek Chiefs began the process of creating a Chi-Naaknigewin – a written constitution to enshrine their inherent rights in a template for member communities as an important step to moving away from the imposition of Canadian statutes and laws – Shiikenh-baa played a major role in the Nation-wide process of seeking input for the words that would embody grassroots aspirations for Anishinabek sovereignty.

He played a key role in the creation of Ngo Dwe Waangizid (One Anishinaabe Family) – the Chi-Naaknigewin’s preamble expressed in Anishinaabemowin – defined in the Chi-Naaknigewin as the Nation’s official language.  He saw to it that those guiding Anishinabek principles were burned into a stretched deer hide on prominent display in the Anishinabek Nation Head Office in Nipissing First Nation, infusing the words with more permanence than if they had been written on paper and smothered behind a glassed-in frame.

Spirituality was much more than words for Shiikenh-baa, whose handiwork can be seen in the ethereal skylit roundhouse he fashioned for Sheguiandah – the home community he liked to call “the centre of the universe.” It is remarkably fitting that the ceremonial item at the very heart of the Anishinabek Nation is the Eagle Staff, which he himself carved.

He lived his teachings, never lecturing, preaching, admonishing, or criticizing others. He would console a conference organizer devastated by a poor turnout by saying, “Everyone who is supposed to be here is here”, a philosophy he undoubtedly accepted when his Sunrise Ceremonies or sweats might not get the attendance he would have liked to have seen.

The importance of including ceremony in all major political deliberations was fundamental to him. The concept of personal sacrifice – often referred to in this era of Reconciliation as “reciprocity” – was second nature to him.

“How are you going to pay for that?” he would challenge those who proposed grand courses of action.

He didn’t write the speeches, policy papers, or briefing notes essential to the political advocacy exercised by political organizations, but his simple mantra “Act Indian, not Indian Act” encapsulated the spirit behind those thousands of words.

His countless hours of political contributions were secondary in his heart to those he dedicated to his wife Pearl and his family, including many winter nights spent driving a grandson to hockey games and tournaments all over the province.

Dbaadendiziwin (humility) is not always a trait associated with those who devote their lives to political objectives. His actions exemplified that teaching – he admired the plucky little chickadee as much as the majestic Eagle – as well as the other six Grandfathers included in the preamble: Zaagidwin (Love), Debwewin (Truth), Mnaadendmowin (Respect), Nbwaakaawin (Wisdom), Gwekwaadziwin (Honesty), and Aakedhewin (Bravery).

May his Spirit be in a better place, and shine in the night sky with all the other stars.

Maurice Switzer is a citizen of the Mississaugas of Alderville First Nation. He is fortunate to have been one of Shiikenh’s pupils. 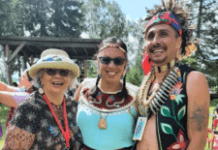 The Power of Family Memories