Two weeks ago, an annual occasion with a silly name helped bring awareness to something that is anything but silly. World Toilet Day is held every year on November 19, and this year the Ryan’s Well Foundation hosted a 24-hour online fundraiser. Observed by the United Nations since 2013, World Toilet Day is meant to raise awareness of the 3.6 billion people – half of the world’s population – who continue to live without safe sanitation.

“Something that goes hand-in-hand with clean water is proper sanitation,” Ryan told the Times. “Something as simple as toilets.” While many of us are inclined to take toilets for granted, they play a critical role in keeping our drinking water clean by preventing bacterial contamination of water in the natural environment. Local residents who use private wells and septic systems may know of this importance when it comes to maintaining their septic tank to prevent sewage waste from leaking into the aquifer that feeds their well and other’s wells. Most communities that have municipal water services available also have “drinking water protection zones” that help keep municipal source water safe from this same type of contamination.

Saturday’s online fundraiser was not the first of its kind for the Ryan’s Well Foundation. “We’ve done them in the past and we’ve managed to fundraise a bit of money,” Ryan said. “Staying healthy is not just about clean water. If people have access to proper sanitation, it helps with all those things in terms of not getting sick.”

Ryan Hreljac has become a well-known name in Kemptville. At age six, he raised funds for a well in Africa. His story quickly garnered worldwide attention and he was featured on the Oprah Winfrey Show on two occasions, in addition to other international media. A street in the shopping district in the east end of town was named “Ryan’s Well Drive” in honour of the noble work undertaken by the local organization. Now an adult, Ryan remains involved with the Ryan’s Well Foundation as its Executive Director. The Foundation promotes not only safe practices and clean water, but also focuses on equality for women, who often bear the brunt of the responsibility for accessing clean water and also typically have no proper menstrual education. 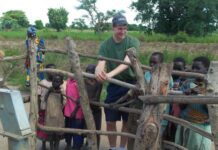