Rideau Bridge to Canada welcomed their second Syrian refugee family to Merrickville a couple of weeks ago, despite heavy delays due to COVID-19. Odae Alaboud, his wife Haifa, and their four-year-old daughter, Sham and one-year-old son, Zain, arrived in Merrickville on October 7, after a long 2-day journey from Kuwait. Odae is the brother of Ataa Erhayel, whose family were the first Syrian refugees to be sponsored by Rideau Bridge to Canada, almost 3.5 years ago.

Audrey Bridge, of Rideau Bridge to Canada, says the group is very happy to finally have the Alabouds in Merrickville. They were supposed to arrive in Canada in June; but, because of the COVID-19 pandemic, their arrival date was delayed. Audrey says that, at one point, they thought they wouldn’t be able to welcome the Alabouds to Merrickville until next year. “The private refugee program got shut down, and we were originally told that they weren’t going to get things going again until 2021,” she says. “We’re very excited that it did happen this year.”

When the Alabouds arrived in Ottawa, they were picked up from the airport in a bus by volunteer driver John Brauneisen. Odea will always remember the smile on his wife’s face, as they drove with their two children to Merrickville. “She told me: This is the country where I want to raise my kids,” Odae says. “It was one of the most amazing moments in her life and my life. It’s everything I’ve dreamed about.”

When the Alabouds arrived in Merrickville, they were greeted, from a distance, by a few of the members of Rideau Bridge to Canada and the Erhayels. It was the first time Odae had seen his sister in 9 years. “I can’t explain my emotion,” he says, remembering the moment. “Ataa is one of the closest people in my family.” Because of the strict quarantine rule for international travellers, the Alabouds had to spend two weeks isolated in Audrey’s apartment in Merrickville. Although they were very thankful for a comfortable space to stay while in quarantine, they couldn’t wait until they could share a meal with their family again. “We’re counting the hour by hour.”

The past few years have not been easy for Odae and Haifa, and their relationship, as Odae calls it, is a “war love story.” They come from the same village in Syria, but both had to flee the country because of the civil war. With a PhD from the University of Damascus, Odae left first to teach math at the University in Kuwait. He kept in touch with Haifa but, when the lines of communication started to get cut in Syria, he told her to leave the country. She was able to make it to Turkey, and, when he could, Odae travelled to meet her. They were married in Turkey in 2015, without any of their family, which Odae says is unusual in the Arabic culture. Odae and Haifa maintained their marriage long distance until 2019, when Haifa was permitted to come to Kuwait because they had been sponsored to come to Canada. “It was the best five years of my life, even though we were separate,” he says, adding that he hopes they will never have to be apart again.

Once the Alabouds are out of quarantine, Odae says their focus will be starting their new life in Canada. He will be looking for a job, hopefully in academia, where he feels the most comfortable. They are hoping that Sham will start school in Merrickville in November, while Haifa will be staying home with their baby and focusing on improving her English. Long term, Odae says he would love to see her finish her post secondary education, which was disrupted because of the unrest in their home country. “We hope to build a life for ourselves and our children. Our priority before was safety, and now we can open all the doors for our future.”

Audrey says that COVID-19 not only threw a wrench into the Alaboud’s travel plans, they also haven’t been able to do as much fundraising as they would have liked before they arrived. “We had a horseshoe tournament scheduled, we had another dinner scheduled, we had a golf tournament scheduled, which, between the three of them, judging from the past, would have brought us to our target. So, we’re going to have to come at fundraising from a different way.” As with any refugee sponsorship, Rideau Bridge to Canada will be responsible for supporting the Alabouds for up to one year, while they settle and get on their feet. To help support the family, you can go to the Ottawa Community Foundation website and search for Rideau Bridge to Canada under the donate tab to make a donation and get a tax receipt.

The group is also looking for long term housing for the family, which is proving to be difficult, with the lack of rental properties in the area. Audrey encourages anyone with leads on a two bedroom home or apartment in the Merrickville or Kemptville area to contact her at ajkbridge@aol.com.

The experience of bringing a second Syrian family to Merrickville, and witnessing the reunification of a family, has been wonderful for Audrey. “A beautiful thing to happen in these awful times.” 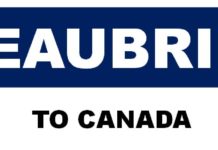 Arrival of Second Family from Syria