Have you ever thought about the fact that we regularly engage in revolutionary activity in Canada generally, and in North Grenville in particular? At least, it is becoming more and more revolutionary these days to be able to vote, to choose who will represent us, who will make decisions on our behalf. Even more revolutionary is the fact that we can remove those individuals from office if they don’t live up to their responsibilities. Yes, I know, democracy is not as simple as that, and some people manage to convince others to continue voting for them no matter how much they fail to do their job. But that’s part of the deal, isn’t it?

We have started a new municipal election campaign, and we have a couple of months to take a look at the candidates to see what we think of them, of their ideas, and, yes, their personalities. Because personality can make a difference as to how we vote, whether that is a good thing or not. You see examples elsewhere (think of Boris Johnson and Trump) that cause you to scratch your head and wonder why anyone would vote them into positions of power and influence. It is times like that when the downside of democracy becomes obvious when someone you don’t like gets elected!

There are so many ways in which we exercise our revolutionary activity: First Past the Post, Proportional Representation in all its many formats, even interviews and appointments when necessary. Whatever the form we use, there is something amazing in the very fact that we have this power. Not long ago, only people with large property holdings had the right to vote. Cliques in society, usually men of wealth, had total control over parliament and the passing of laws, often to their own benefit. Sadly, that can be the case even today.

But the fact that we recently celebrated the centenary of women being allowed the vote (note that word: “allowed”), or that Indigenous people were historically given a choice: the vote, or maintaining their cultural identity, all of this points to just how recent this revolution has been. And yet, we take it for granted. Many people don’t bother to vote at all. Some believe their vote makes no difference anyway. Others will vote in federal or even provincial elections, because they think that’s where the power lies, but ignore the municipal level as being irrelevant.

Remember that when you complain about property taxes, services like roads and garbage, when you need someone to come and put out the fire destroying your home or business. Municipalities deal with the issues that affect your everyday life, such as Emergency Services, Economic Development, Garbage Collection and Recycling, Long Term Care and Senior Housing, Road Networks, Parks and Recreation, Planning and Development, Social Services, Tax Collection, and Water and Sewage. Quite a list, isn’t it?

We in North Grenville will elect a Mayor and four Councillors in October, and we have a choice before us. Nine individuals are running for Councillor positions, and two for the job of Mayor of North Grenville. Residents of Merrickville-Wolford have a similar choice. All of us have the opportunity to have our say in who those people will be, who will make the decisions on the future of our community and its character and values.

In the past, we have seen how the composition of any given Council can affect the community in very serious ways. The very atmosphere of our society can be impacted, for better or worse, by the character, personalities, and attitudes of members of Council. The relationship between Council and Municipal staff is vital to the running and planning of a community. This, too, depends on the approach taken by members of Council: are they working collaboratively with staff, or seeking to impose authority on them. This really does matter for all of us.

So, the choice we make is important, it is revolutionary that we even have a choice to make. So many other places in this troubled world are denied that choice. But let’s not be too idealistic about it either. People are people, and no-one is even close to being perfect, so there will always be problems when it comes to governments and governed. It is easier to just ignore elections and the operation of municipal councils and just complain when some issue affects us personally. There are times when knowing what’s going on has been frustrating, irritating, tending to raise blood pressure and even bring about sleepless nights. But enough about me.

The NG Times will be holding an all-candidates meeting for those running for the Councillor positions on September 8, at the Municipal Centre, beginning at 7 pm. Details can be found in this and in upcoming issues. It has proved to be very awkward to have both candidates for councillor and candidates for mayor at the same meeting, as there are usually too many people in too short a time to give everyone a fair chance to speak. And issues for mayoral candidates can be different also. It is intended that some form of meeting will be arranged with the two mayoral candidates in October in some format yet to be agreed. More on that in later issues.

In the meantime, get ready for your vote. Think about the issues you want to hear about from candidates, and don’t leave it until after the election to decide if the right people have been elected for the next four years. Questions for the candidates can be submitted to [email protected] before the debate. We also hope to have interviews with each individual candidate available on-line and in print over the coming weeks. Voting is a hard-won and revolutionary act. It’s your turn to join the revolution. 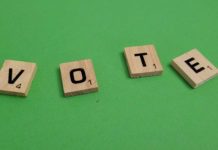