In the recent past, Kemptville had a small brickworks factory, a small pipe factory, a milk plant, a creamery, a maple syrup production unit, numerous cheese production sites, a cheese export business, and a popular agricultural college, and fair grounds. Today, we have none of these, they are all gone, as are the jobs. We do not even have exhibition grounds any more. However, we do have a fried chicken outlet, a couple of drive-thru car washes, some coffee shops, some new vinyl- housing sub divisions and a sewage plant that has overflowed, and, of course more debt.

Tourists and travellers coming off the main Highway stop for a coffee, then just keep going, bypassing “Old Town Kemptville”, despite thousands of dollars of municipal advertising to promote “the Old Town”. This “by-passing” situation leads to an interesting observation. In an attempt to re-vitalize the downtown sector, a publicly funded “Community Improvement Program” has been instituted. This program involves painting the exterior of certain buildings, and a few other cosmetic changes, with the expectation being that new businesses will rush into the area, given the attractions of the new paint and a temporary subsidized rent. And, of course, it is expected that the rural people, and tourists, will come to “Old Town Kemptville” to admire the new paint job. Where will they park?

This is the equivalent of putting make-up on a corpse and expecting a resurrection. It will not work. In this case, the municipal council is treating the symptoms, and not the underlying problem. Given that the area needs more than the casual minimum wage jobs provided by the service industries, what is truly amazing is that this council ignores the largest industry in the area, one that brings about 200 to 300 people per day into the area during week-ends, and somewhat fewer during the week days.

The equine industry purchases most of its inputs locally, and uses the local trades as needed. No other industry of comparable size achieves this, still, the council refuses to acknowledge this industry, nor any of the associated farming businesses.

Yet, despite this continuing decline of local industry, the council is very busy, motions are proposed, reports commissioned, and studies are done, surveys are instituted, taxes are raised, newspaper pictures are taken, but nothing truly useful for the community happens. If one visits council chambers, one finds lots of activity, nothing truly useful happens.

So a choice must be made between more of the vinyl village development, or more of a vibrant community development where growth and jobs comes from within and not via speculators.

This whole concept as outlined in the STANTEC REPORT, and which the council accepted as policy last winter, and for which “public information” hearings were held in February of 2016, “the north west quadrant development plan” thus became matter of official policy objectives and goals.

It is now a complete multi-million dollar failure as a program, due to the failure of funding. The over hyped “green and growing” program is now “brown and dead”. Indeed, the senior planning officer is no longer in office, the chief financial officer is no longer with us, and another financial officer has left. After spending large sums of money on this failed scheme, the council has no plans as to what to do next, yet they are still going to raise taxes.

There is an alternative to the current situation of decay and decline. I leave you to your thoughts. 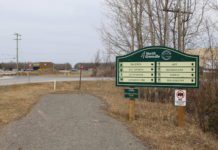 Walking down the line