Gathered at the Kemptville Cenotaph, on a beautiful, sunny and windless November 11th day,
The representatives of all the various religions encouraged us, to remember our Lord and to pray,
The marchers had stopped their marching and the musicians had put their instruments to rest,
When a flock of pigeons rose up into the sky, as if on their own peaceful quest.

Their wings flapped in unison, and, above the scene below, hardly made a sound,
As the trumpeter blew “The Last Post” loudly and it echoed all around!

Heads were bowed in silence, as we remembered those who, in all the wars, had died,
And for many it was a short time to think about what had taken place, – their own thoughts deep inside.

These were soon dispersed, as “The Reveille”, roused them and they awoke,
But not, as many of those; who they were remembering did; to guns, noise and smoke!

For us the sun was still shining, for the laying of the wreathes and right until the last,
When the bands reformed and the parade, made its final salute and “March-Past”,
It was only when the crowd had almost departed and dispersed,
That the flock of pigeons re-appeared, as if they had rehearsed!

And, as one, came in to land, with wings outstretched, down on to the ground,
To their own little part of Kemptville, where, now, thanks to the sacrifice of others, peace does abound.

We will remember them! 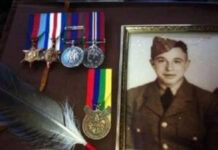 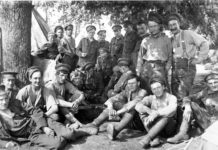