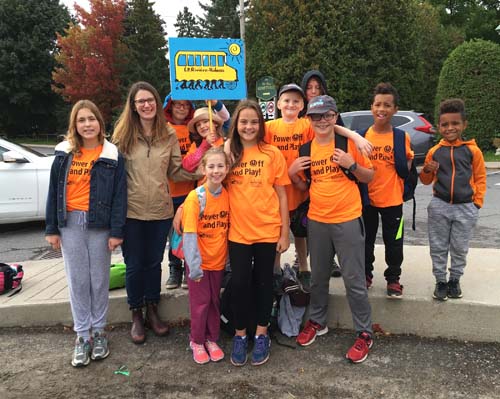 A group of students who attend school at the Kemptville Campus met at the corner of Prescott Street and Van Buren Street last week to participate in a parent-led walking school bus.

Most of the children who gathered at the intersection were from households in downtown Kemptville; however, some parents who live out of town dropped them off at the meeting point to show their support for the initiative.

Group leader, and spokesperson, Amanda Gould, said that, although the initiative was not officially endorsed by the Municipality, it is in recognition of North Grenville Council’s support of the North Grenville Active School Travel Charter. “I am personally doing this, not only to promote the health benefits of this sort of program, but also in the hope that the potential side-benefits of active school transportation, such as reduction in school transportation infrastructure costs and associated environmental pollution, will become increasingly recognized,” Amanda says.

Amanda and her husband chose to move to downtown Kemptville right before the birth of their daughter because of the proximity to schools. When their daughter first started kindergarten, they benefitted greatly from the crossing guard who was posted daily at Prescott Street and Reuben Crescent to help kids from Kemptville Public School (KPS) cross the street safely.

Amanda says that she was disappointed when KPS was moved out to the Northwest Quadrant, and having the ability to have their daughter bike or walk to school was a factor in them deciding to leave the Upper Canada District School Board (UCDSB) in favour of one of the schools on the Kemptville Campus.

For the past four years, the family has been taking advantage of active school transportation, although lack of proper infrastructure, and winter maintenance along Prescott Street, has made it difficult. “We have not always been able to take full advantage of this option when we’ve had the opportunity,” she says.

Amanda is encouraged by council’s commitment to the Charter, and hopes that it will be the catalyst to remove the barriers that exist for active school travel in the Municipality. The parent-led walking school bus was only in place for a week, but Amanda says she would love to see it become a staple in the downtown area. “If we can get proper crossing guards and infrastructure in place, I would like to see it happen more often,” she says.