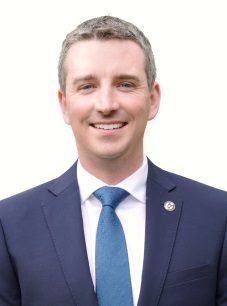 Michael Barrett lives in Leeds-Grenville-Thousand Islands and Rideau Lakes with his wife Amanda, and their four children. Following his service in the Canadian Armed Forces, Michael was elected to represent the village of Spencerville and the agricultural area of Edwardsburgh Cardinal on municipal council.

In addition to his regular duties, he is also the Chair of the Public Works, Environmental Service, and Facilities Committee of the Whole. With his Council colleagues, Michael focused on economic development and job creation.

Those efforts were realized with the opening of several new industrial park-based businesses, including the opening of the Giant Tiger Distribution Centre that saw the creation of over 350 jobs. Michael has worked as a Human Resources Manager for an Ottawa-based business since the completion of his military service.

For the past five years, Michael has also been involved in the local Conservative Electoral District Association, including as President, campaign volunteer, and as an organizer of local meetings with stakeholders.

“For the past five years, I worked with MP Gord Brown in Ottawa, and most importantly, around our riding, organizing his round-tables with farmers, small business owners, hunters and anglers, land owners, seniors and youth. Once elected, I will launch a series of issues-based public meetings, open to everyone, in communities in every corner of the riding to continue bringing your voice to Ottawa.

“I will maintain satellite offices in Kemptville, Gananoque, and Westport to serve you wherever you live in the riding. I will work with all municipal councils to advance all our community’s needs in Ottawa. I know what it means to listen, and to act. I know that you love this riding and this country as much as I do and you share my concern about where our country is headed. I serve on council to help my community – I serve as riding association president because I am a principled Conservative – I served alongside the finest men and women in our country’s great military because I love our country. I have the political and life experience – the energy and the desire – to represent and serve you in Ottawa.”

Over the years, Conservative government and representation has delivered:
Extending the hours at the Rideau Canal lock stations
$12M investment in the Port of Johnston
$110M in Eastern Ontario broadband
$25M in local infrastructure
$60M for construction at the two international border crossings to help facilitate tourism and trade.

Tea With The Greens