Thomas Alexander Parnell was very much a churchman of his time. In the nineteenth century, the Anglican Church in Canada saw itself as the church of the Establishment, the leader in social and political mores and attitudes. Parnell, as the Minister for both Merrickville and Burritt’s Rapids, was a recognised figure of authority throughout the area served by his churches, and, through the agency of the Canadian Churchman newspaper, exerted an influence far beyond.

As it neared the end of its first year of publication, his newspaper had attracted subscribers throughout Canada West and agents for the paper were located as far away as Port Hope, Alderville and Morrisburg. The paper was even available in Quebec City. The pages of the Canadian Churchman were filled with news and information, both secular and church related. Train schedules for both Brockville and Prescott lines appeared each week, alongside lengthy reports on diocesan matters, histories of the Archbishops of Canterbury, and general news items. There was coverage of the American Civil War, then in full flow, usually with a pronounced sympathy for the Confederate cause. This was the common stance of Canadians and the British Empire generally, leading to very strained relations with the United States Government.

Side by side with advertisements for Beeton’s Illuminated Family Bible, or the Englishwoman’s Domestic Magazine, were promotions for Spalding’s Throat Confections and various insurance companies. But there was always a note of admonition about the articles Parnell chose to publish. Some were critical of women in the congregation who, instead of listening attentively to his sermons on Sundays, cast jealous or dismissive glances at each other’s hats. Other articles complained about the lack of financial support provided by congregants to their minister, although there were also reports of very generous donations.

As mentioned in the last article, Donation Visits were a feature of parish life. In 1863, for example, as Parnell was about to leave for a few weeks’ vacation “for the benefit of his health”, a large gathering visited him at the parsonage for an evening of music and fellowship. They also brought along the usual donation of food and wood, accompanied by a generous gift of more than $50. This was in addition to a gift of $45 from the Burritt’s Rapids congregation, a Christmas collection of around $65, and his usual stipend as a minister. That this was a normal part of church life is shown by the appearance of an article in the same issue reporting a similar Donation Visit made to the minister in Kemptville.

But, as the year progressed, some readers began to complain about the content of the paper. Parnell was forced to cease publishing his series on the History of English Literature, as he was informed that people weren’t reading it. Others were unhappy that much of the newspaper in the summer of 1863 was taken up by a comprehensive reprinting of the entire proceedings of the diocesan synod. But such content was an indication of how closely Parnell was involved in the wider affairs of the diocese.

This Merrickville newspaper was having an impact far beyond the boundaries of the village. And T. A. Parnell was gaining a reputation within the Anglican Church too. By the end of the second year of the newspaper, he had been promoted to Archdeacon and transferred to Kingston, seat of the Diocese, where he took on the role of Clerical Secretary to Synod. The Canadian Churchman moved with him, leaving Merrickville behind. The Canadian Churchman passed under the control of others, but Thomas Alexander Parnell had not seen the last of this region. When the long-serving Rector in Kemptville, John Stannage, died in 1880, Parnell was sent to replace him, while Stannage’s curate, Albert Spencer, went to Kingston to take on Parnell’s role as Clerical Secretary and, apparently, control of the newspaper as well. In fact, the copies of the Canadian Churchman used for these articles were originally owned by Albert Spencer. But Parnell did not stay long in Kemptville. In fact, at the very first Vestry meeting after his arrival, he announced that he intended to resign as soon as possible. T. A. Parnell had been transferred to a diocese in New York State by the mid-1880’s, and there he worked until he retired. He died in 1915.

The Canadian Churchman is now remembered in the Anglican Church as having been established in 1875, after Parnell had moved to Kingston and relinquished control of the paper. Today, it is known as the Anglican Journal; but we can now remember that Volume 1, Number 1 was published in the village of Merrickville in 1862, before moving out into the wider world. 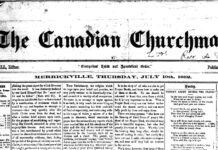