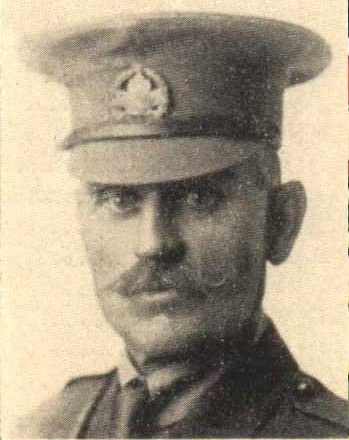 Horace Hutchins was born on January 28, 1868 ,in Kemptville, Ontario. His grandfather had arrived in Oxford-on-Rideau Township from Ireland around 1820 and the family had farmed in the area since then. Horace attended the Kemptville Union Public and High School on Oxford Street, and then became a farmer and businessman, an agent for Frost and Wood farm implements company. He was Reeve of Kemptville in 1912. On August 3, 1915, he enlisted with the 109th Canadian Infantry Battalion, a unit of the Canadian Overseas Expeditionary Force (CEF). His Officers’ Declaration Paper notes that he had served eight years with the 56th Regiment in Kemptville and had been Captain in the local militia company, the 56th Lisgar Rifles.

To get to the front, Major Hutchins accepted a reduction to the rank of Lieutenant. While serving with the 21st Battalion, Horace was struck and killed by shrapnel on April 9, 1917, as he led his men across No Man’s Land during an attack on Vimy Ridge.

His wife, Mary, died in October, 1918 of the Spanish Flu, one of the earliest victims of the pandemic that swept the world in 1918-1919. They had no children. But the Hutchins family continues to be represented in the life of North Grenville today, and Horace is remembered.