A new initiative called “Merrickville-Wolford Stands with Ukraine” launched on Sunday, March 20. The initiative, which is being spearheaded by the Merrickville-Wolford Chamber of Commerce, aims to raise money to support the people of Ukraine as the country and its military and civilians remain the target of attacks from Russian forces. The initiative has a current fundraising goal of $15,000. A release sent to the Times provides details of the fundraising model. 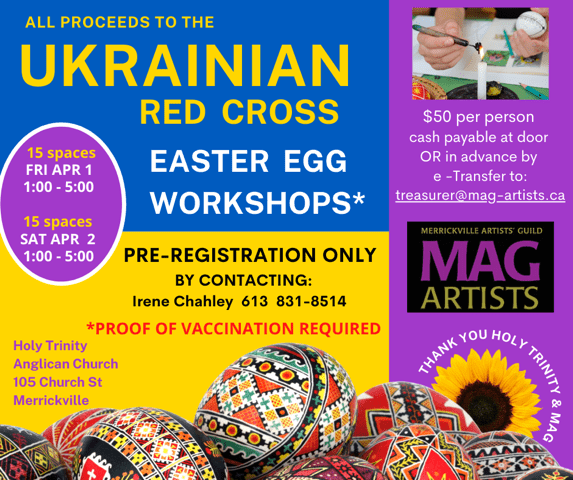 “Businesses and local organizations have been invited to participate by hosting an event, making a donation directly, or through specific sales, donation for an online auction, or hosting a donation collection box. Some examples include a Ukrainian egg decorating workshop hosted by the Merrickville Artists Guild, Ukrainian and other food/retail events with a percentage of sales donated.”

The event kicked off on March 20 at Main Street Family Restaurant, where Mayor Doug Struthers declared that day as “Ukraine Day” in the Municipality. Although the initiative is local, the Chamber has even bigger visions. “More can be achieved when we work together as a community and potentially inspire others to do the same,” the Chamber’s statement reads. “A challenge will be extended to other Chambers of Commerce to engage their communities.”

When asked how the response from the community has been, M-W Chamber of Commerce Director, Yves Grandmaitre, answered that the response has been great, not just from local businesses, but from other local community groups as well. “Plans are still being formulated by some for what activity they will undertake, so many more will be coming online in coming days,” said Yves. The press release also points to overwhelming community support, noting that: “Blue and yellow representing the flag of the Ukraine can been seen throughout the village’s core, including wrapping on the Chamber posts lining St. Lawrence Street. The municipal office, businesses, homes, and village entrance signs are flying Ukrainian flags in support.”

The war between Ukraine and Russia began with the Russian invasion of Ukraine on February 24. Russian President, Vladimir Putin, has claimed that the presence of Russian troops in Ukraine is solely for peacekeeping, due to the perceived terrorist control over two Ukrainian regions – Donetsk and Luhansk. However, overwhelming evidence, including countless videos and photographs, have pointed to a full-scale attack on Ukraine at the hands of Russia, including vicious bombings and fatal attacks on civilians, including children.

More about the Merrickville-Wolford Chamber’s initiative, including updates on the success of the fundraiser and how to participate, can be found on a dedicated Facebook page at www.facebook.com/merrickvillewolfordstandswithukraine, or on the Chamber’s website at merrickvillechamber.ca.