On February 4, 1972, 18 snowmobile enthusiasts gathered in the home of Roger and Lois Beckett and formed the Kemptville Snowmobile Klub. Meetings were held in the Fire Hall, and later in the Legion, as the membership grew. Also in 1972, Bruce Turner, a game warden from Kemptville and a club member, organized a trip for 30 snowmobilers from Kemptville to Calabogie, staying overnight and returning the next day. This was a 200 mile round trip, without groomed connecting trails like we have today. This started a tradition for the club of organizing weekends away every year since then.

In 1976, the club decided to join the Ontario Federation of Snowmobile Clubs (OFSC), and the OFSC snowmobile permit was sold to raise funds for trail maintenance. On February 26, 1979, the club became incorporated and, shortly thereafter, on March 21, 1979, they purchased the old former Orange Lodge at Patterson’s Corners for $3,000. In 1995, the club purchased 2.5 acres of land that surrounded the clubhouse from Stevenson’s Christmas tree farm for the price of $20,000.

In the early years, snowmobiling really caught on in Kemptville, mainly due to the fact that we had Limerick Forest close by, and the Ministry of Natural Resources groomed many snowmobile trails there for the enjoyment of the public. We also had the Scotch Line to Merrickville, and the Ferguson Forest, for snowmobiling. A family from Roebuck, by the name of Hilliard, and Sylvia Kenney used to run a coffee shop in Limerick where it was possible to see 2-3 hundred snowmobiles parked outside the old log building, waiting for hot chocolate and a hot dog.

In the early days of grooming, we purchased a new 1975 Alpine, which was run by Percy and Gladys McFarlane, and later a used Bombardier BR100 came into service, which was operated by Aaron Scott and Arnold Williams. Then, in 1993, the club purchased a brand new Bombardier BR60 with the help of an OFSC grant for $50,000. In 1997, the club put an addition on to the clubhouse, and in 2012 a new roof was put on with the help of a North Grenville Community Grant.

During all of this time, our membership has grown from 100 members to over 700 today. Here is a list of the club presidents that have served since 1972:

Over the years, the club has been a strong community supporter. Our charity of choice is Easter Seals, and we started raising money in 1975 with SNOWARAMA, a snowmobile rally where all the proceeds go to Easter Seals. We have also donated to the Snowsuit Fund, Salvation Army, Lazarus House, Ride for Dad (prostrate cancer), and the Pink Ride for Breast Cancer. We partnered with North Grenville in 2015 and turned over a cheque for $20,000, which was awarded to the club from the Ministry of Tourism. These funds went towards the development of the rail trail through the town of Kemptville.

Our club has been very successful over the years, due to good management and providing an interesting variety of events for our members to participate in. We have included a mix of fundraising, charity, safety, and entertainment events. With the exception of these last couple of covid restricted years, our calendar has events all year around. We are an active community organization and we pride ourselves on providing thousands of hours of safe, enjoyable recreation at no cost to the taxpayer. We owe our success over the last 50 years to the generous landowners who let us use their land at no cost, and to the volunteers who run the club, again at no cost. We are looking ahead at the next 50 years with excitement and anticipation. 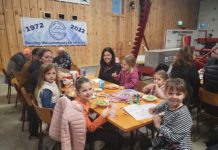 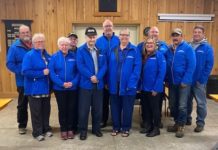 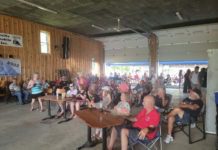 No Snow needed to Celebrate this Party!