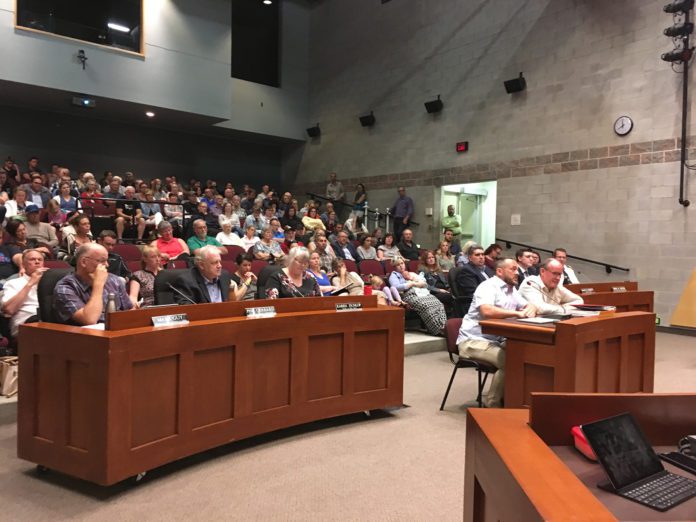 While fundraising and plans for the SENS RINK were materializing, the opportunity arose to have the Canada 150 Rink from Parliament Hill in North Grenville. Southgate Church put forward an application to have it relocated to their property on French Settlement Road. Council passed a resolution in August 2018 for the municipality to assume responsibility for all donations and expenses as well as issuing charitable receipts for everything related to the Canada 150 rink. According to North Grenville Director of Parks, Recreation and Culture, Mark Guy, this was because Southgate Church did not want to have to wait for confirmation from the CRA that they were able to issue charitable receipts themselves for the project.

At the time, the idea of the Canada 150 Rink being placed at Southgate Church was met with some opposition from the local community. Although the church said everyone would be welcome to use the rink, many felt that a portion of the population would feel uncomfortable using a rink on the property of the church, especially because of its Wesleyan faith which considers homosexuality as contrary to the will of God. Others found it difficult to support a community rink which was so far on the outskirts of town.

When the Canada 150 Rink went to Gananoque, the Southgate community did not give up hope. In September 2018, Ben Last, the pastor at Southgate Church said they were continuing to partner with the Sens Foundation to push the rink forward. Since then, the church has secured $35,000 in donations from a fundraising gala, $50,000 from the Sens Foundation and $50,000 in corporate funds. On June 11, 2019, Ben and Randy Hopkins of Southgate came before council asking them to apply for a $150,000 OTF grant to contribute to building the rink. Their presentation stated that should they secure the funding, it would bring them up to $285,000 and a private donor was willing to match these funds giving them a total budget of $570,000 to build the rink. This would allow them to get started on a large outdoor rink, with the plan of eventually having a completely covered facility with its own cooling system to allow them to keep the rink open for longer every season. Their plans are over an above the scope of a regular SENS RINK which typically costs around $200,000 to build.

The recommendation that staff presented to council after the presentation from Southgate was not to agree to apply for the OTF grant. “After careful thought on the request, staff feel it is premature to support it,” the report states. This is because the municipality is about to undertake a 10-year Parks Recreation and Culture Master Plan Study which will take into consideration the municipality’s current recreation assets and the needs of the entire community in terms of recreation facilities. The OTF is not a bottomless fount, and staff feel that receiving such a large grant from the OTF for this project might jeopardize receiving future funding for facilities outlined by the recreation master plan. Council agreed with the staff report and voted unanimously not to apply for the grant. “Not supporting going forward with the Trillium grant does not mean that we don’t support you going forward with a rink at some point in time,” Councillor Doreen O’Sullivan said at the meeting. “We are only talking about the Trillium fund tonight.”

The decision was met by uproar from the many members of the Southgate Church who attended the meeting last Tuesday. When given the opportunity to speak after the decision was made, some expressed their distaste at not being able to voice their opinion before the resolution was passed. “I am a little saddened that this part of the discussion came after the motion,” said a Southgate Church member at the meeting. “It was disappointing to me as a community member.”

He also addressed Holly Brown, the founder of LGTBTQ2 rights group Rainbow Union Dundas and Grenville, who spoke before him at the meeting addressing her concerns about Southgate Church’s views on homosexuality and the impact it would have on those from that population using the proposed rink. “I truly believe that what you go through is true and right and beautiful. I do not speak for everybody in my church, but I speak for me and I believe that that is the case,” he said.

Several other members of Southgate Church echoed John’s sentiments, including Southgate Church’s leader Ben, who invited Holly to have a face to face discussion about the church’s view on the LGBTQ2 rights. “There are members of our congregation who are part of the LGBTQ2 community and who helped and supported and took leadership roles with the Pride parade,” he said, adding that he feels like those members feel comfortable at the church.

The location of the rink in terms of community accessibility was also brought up at the meeting. Those who oppose a rink supported by public money on French Settlement Road believe Riverside Park would be a great alternative. Even a member of Southgate Church posed the question to his own congregation as to whether they would support a rink in a municipal park. “I’ve heard a lot of people from Southgate say that you are passing up a free opportunity here, because Southgate provides a lot of volunteers, they’re willing to provide the space and the fundraising,” he said at the meeting. “Why is all that off the table if it’s on a municipal property in a municipal park? Why would that change if it isn’t on Southgate’s property?”

Ben says that should an outdoor rink be built in another location, he believes his community would be the first to support it. “The people of Southgate volunteer all over this municipality because we love it and we are residents here,” he wrote in an email to the NG Times. “Volunteering in roles from coaches to fire fighters, we want to see our community thrive.” According to the Sens Foundation, their $50,000 donation is not contingent on the rink being built at Southgate and the municipality has complete control over where the SENS RINK is located.

Southgate Church is not out of options as they are eligible to apply for an OTF Grant themselves, although the deadline for this round of grants has now passed. The only reason they needed council to apply for the grant for the SENS RINK is because of the partnership created by the previous council where all funding for the rink flows though the municipality.

“I know it’s not dead in the water, but it’s difficult when you are working with a partner who has the opportunity to support and does not choose to support. Especially when there are matching dollars on the line,” Ben told council. “We respect your decision. It’s disappointing but that’s a part of life and that’s ok.”

A Test of Trust