When members of the National Capital Region’s theatre scene gathered at the National Arts Centre on December 3, the Classic Theatre Festival was honoured with two Capital Theatre Awards, capping off its 9th successful summer season in heritage Perth.

The 20th annual awards ceremony, organized by some of Canada’s top theatre reviewers, presented Toronto-based performer, Catherine McNally, with a Best Actress Award for her performance as Kitty Warren in the Festival’s 2018 production of the GB Shaw classic, Mrs. Warren’s Profession, which was directed by the Festival’s Artistic Producer Laurel Smith. In a new surprise category for an outstanding body of work in publicity and outreach, Festival Associate Producer, Matthew Behrens, was given the Audrey Ashley Award, named for the late writer who worked as the Ottawa Citizen’s music and drama editor for an unprecedented 25 years.

Since the Classic Theatre Festival in Perth was founded by Laurel Smith in Perth in 2009, it has garnered consistently strong reviews as well as multiple awards nominations for artistic excellence. Smith herself was nominated this year both for Best Direction – her third nomination in the category since 2016 – and Best Production (again, her third consecutive nomination) for the nail-biting thriller Angel Street, aka Gaslight.

The Festival is now busily preparing for its 10th anniversary season in 2019. Next season’s mainstage offerings will feature the 9th-longest running play in Broadway history, the remarkable WW2-era romantic comedy, The Voice of the Turtle (by John Van Druten); George Bernard Shaw’s most popular play, the hilarious Pygmalion (the basis for the musical My Fair Lady); and the longest-running comedy-thriller in Broadway history, Ira Levin’s Deathtrap (by the author of Rosemary’s Baby, The Boys from Brazil and The Stepford Wives).

The Festival also plans its 5th annual season of theatrical walking plays with a brand new show on how residents of Perth came together to survive the Great Depression (running five mornings and two evenings a week). In addition, after the Festival’s huge success of its completely sold-out dinner theatre run at Michael’s Table, a new dinner theatre show will play both Tuesday evenings and Tuesday at lunchtime from June 4 to the end of August. It will feature the Shaw satire on the Roman Empire, Androcles and the Lion.

Those interested in enjoying deep discounts to the 10th anniversary season can receive 25% savings on a season flex pass between now and December 31, and they don’t have to pick their dates until next summer. Tickets can be ordered online at www.classictheatre.ca or by calling 1-877-283-1283. 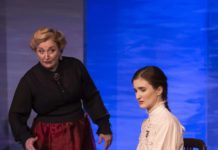