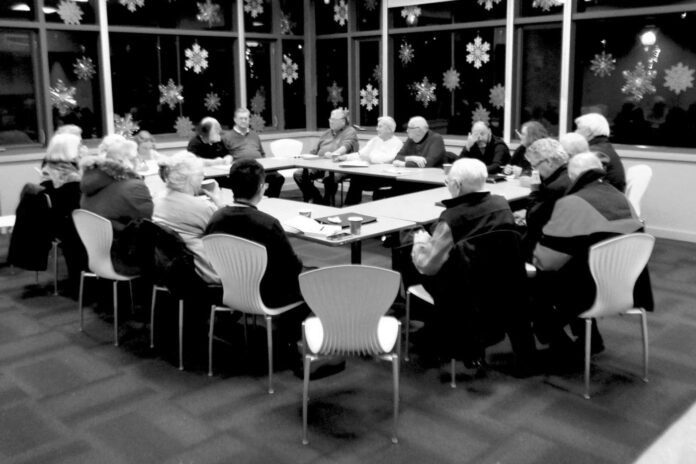 At very short notice, a group of about twenty-four interested residents of North Grenville gathered in the Tallman Room at the North Grenville Public Library last Thursday night to work together on events marking Canada’s 150th birthday which will be taking place throughout this anniversary year. The two dozen who gathered at the invitation of the NG Times, were eager to see our community mark this important milestone in our nation’s history, and many of the groups represented at the meeting have already got plans in the works for some really exciting events in 2017.

The Bishop’s Mills Community Association will be updating and republishing ‘A Brief History Of Bishop’s Mills’. The North Grenville Concert Choir will be performing “Songs of Canada” in Kemptville and Merrickville in May, and the Horticultural Society has already planted bulbs to produce a Canada 150 tulip display when the weather allows. The NG Historical Society is planning a series of short biographies, “Sons and Daughters”, profiling natives of the area who made an impact on the provincial and national stage. The series will be written by Society Historian, Dr. David Shanahan, and will appear regularly in the Times before being published in book form at the end of the year.

There are many other projects already being prepared, and the meeting heard many other ideas which could be followed up in celebrating Canada 150. It is hoped that a co-ordinating committee will be formed from those who attended the meeting last week, as well as anyone else who would be interested in getting involved in following up some of the ideas presented. These included having Canadian flags displayed throughout the municipality, holding High Teas, a garden tour, wine and cheese evenings, and a co-ordinated ringing of bells on July 1 across North Grenville.

And then, of course, there is Canada Day itself. The Canada Day Committee set up by the Municipality is handling most of the arrangements for July 1 in Kemptville, and the Rotary Canada Day parade is signing up those who want to join in the parade with their own special floats. One individual has volunteered to act as Town Crier for the year, if an appropriate uniform can be found, and others are busy with projects that as yet remain confidential.

The Navy League is hoping to reclaim the water this year, with a regatta on the South Branch, while news was shared that the Voyageur Brigade Society will be holding a South Wind Brigade along the Rideau River from June 23 to July 1. More on that event can be found inside this edition of the Times. You will also find information on the amazing Puppet show being organised by the Friends of the NG Public Library, which will feature some of the best puppeteers in the country. 2017 has already begun, and there’s a lot to do and enjoy in the coming months. If you would like to be involved in planning some of those events, contact us here at [email protected].

Planting for the future