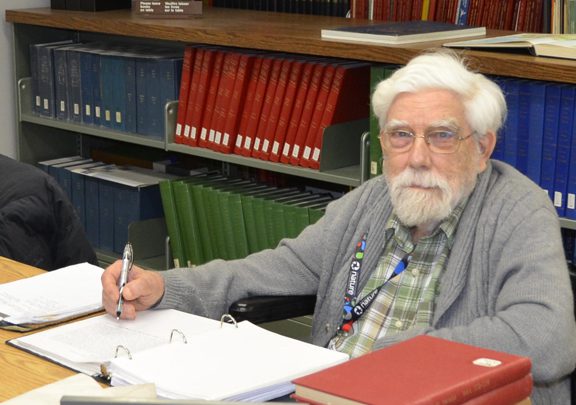 The country lost one of its leading researchers in the field of Canadian reptiles and amphibians at the beginning of this year. Long-time Merrickville-Wolford resident, Francis Russell Cook, died at the Kemptville District Hospital on January 3, 2020 at the age of 84. He is survived by his wife of 57 years, Joyce Cook, daughter Wanda (James), son Thomas and grandsons Alex and Russell.

Francis was born in Wolfville, NS in 1935. His curiosity about nature began at a young age when he witnessed his brother care for and raise a scoop of toad eggs. His dedication to the field of herpetology (the study of reptiles and amphibians) truly began at the age of ten, with a visit to the Royal Ontario Museum in Toronto, where he learned even more about this group of often overlooked animals.

After receiving his Bachelor’s and Master’s degrees from Acadia University, he was lucky enough to land a coveted position as one of the curators in the Zoology Section at the Museum on Nature in Ottawa. In 1960 his hard work and dedication earned him the role of Curator of Herpetology at the Museum of Nature, a role he would hold for 35 years (interrupted only briefly to get his PhD at the University of Manitoba). Under his direction, the herpetology department grew significantly, from about 14,000 specimens to over 98,000. In 1984, it was the largest amphibian and reptile collection in Canada and the largest collection of Canadian material in the world.

Alongside his museum work, Francis also held the position of the editor-in-chief of the Canadian Field Naturalist for a record 34 years, helping generations of professional and amateur naturalists share their discoveries.

In 2019, Francis was recognized with the Order of Canada for his work in herpetology. He received the honour at a ceremony at Rideau Hall, surrounded by his family. He said at the time that he felt it was a huge honour to receive the award along with so many people who made such significant contributions to the country. “It was so awesome to be with all the other people getting the award who have done so much for Canada,” he said.

Francis and Joyce bought their farm in Merrickville-Wolford in 1970 and lived there happily for many years. A biologist herself, Joyce enjoyed accompanying Francis on many of his field expeditions over the years. After he was awarded the Order of Canada, Francis gave credit to Joyce for her unwavering support for him and his research over the years. “Without her, I probably would have run amok,” he said.