The Bodhi Tree Yoga Studio was full of food, fun and friends at their grand re-opening celebration last Saturday evening. The party was a celebration of the changing of ownership of the Bodhi Tree, from founder Gayle Poapst, to Melanie and Rob Charlebois. The pair took over the studio in September and, since then, have been making small changes, while still maintaining the integrity of the studio many have grown to love.

The biggest change is the re-introduction of regular business hours. “One of the things that we definitely wanted is to keep the doors open, allowing people to come in if they need to sit and chat, take a breath, and have some tea,” Melanie says. They also have a lending library, with books on yoga philosophy and meditation that are there to be read in house, or borrowed to enjoy at home.

Community is very important to Melanie and Rob, as is being a part of the revitalization of the downtown. A Kemptville native, Rob remembers when Prescott Street was the hub of the town, with everyone coming downtown to eat, shop, and socialize. Mel says “We need to stop thinking that it’s dead downtown, so we should close. It’s going to take the persistence of keeping the doors open.”

Taking over the yoga studio has been a dream of Melanie’s ever since she started coming to the Bodhi Tree, first as a student, and then as a teacher and manager. “When I moved here, I was a busy mom with two kids,” she remembers. “I needed a space to just breathe, and the Bodhi Tree had such a community feel. It’s where I first met Kemptville.”

With so many people moving to Kemptville these days, Melanie hopes that the Bodhi Tree will introduce another busy newcomer to the community and the benefits of yoga. “That’s really important to me,” she says.

Melanie and Rob wanted the transition to be as seamless as possible, so many of their classes have stayed the same, with just a few additions (like pilates) to the schedule. The studio is also still continuing to raise money for Helping Hands for India, a not-for-profit organization that provides educational opportunities for children in India. “Every dollar goes directly to kids going to school,” Melanie says. “We will continue to have karma yoga classes for donation [to the organization].”

Even though the Bodhi Tree is under new ownership, you can still expect to see the same familiar faces around the studio. Gayle will still pop in to take yoga teacher-training, and the occasional class. “There is nothing I love more than saying she is still here,” Melanie says. 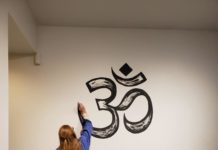