The North Grenville Council Meeting that took place on Monday, April 10, seemed to be a microcosm for the term of the current Council. At the previous Council Meeting of March 27, Councillor Jim Bertram caused some confusion by apparently not following the proper procedure when dealing with some correspondence items that he thought were important enough to discuss at the meeting. Instead, he had to give notices of motion and those items were moved to this week’s agenda under the ‘New Business’ section.

The two items were a motion of support for the Ontario Chamber of Commerce, and a motion of support for MPP Sylvia Jones, who is the Progressive Conservative critic for Infrastructure. There was also correspondence from the Association of Municipalities of Ontario which outlined the organization’s concerns about Provincial Bill 68. An outline of the concerns from AMO was provided.

All three items were discussed by Council. Councillor Bertram did his best to outline why he felt the items were important and in need of discussion and support. Deputy Mayor Barb Tobin did her best to dismantle, undermine and dismiss the motions. At one point, Deputy Mayor Tobin stated that the motion regarding the AMO’s opposition to Bill 68 was unnecessary and that by virtue of the Municipality being a member of AMO, that support was automatic. Councillor Bertram felt that being a member was not adequate support, and wanted to highlight the specific section of Bill 68 that AMO was so opposed to. He also stated that AMO had specifically asked for North Grenville’s support on this matter. Deputy Mayor Tobin stated that there was no such request that she could see. Councillor Bertram replied that he had emails from AMO requesting the support.

You are probably starting to ask yourself where the microcosm is in this. The microcosm is that, over the past year or so, Councillor Bertram has tried to bring different motions and resolutions to the Council table for both discussion purposes and for the advancement of certain items (such as the recent North Grenville Rural Summit). Whenever this happens, it seems that Deputy Mayor Tobin opposes whatever Councillor Bertram is doing, either by voting against it (in the case of the Rural Summit), or by trying to question everything about it, from the intent, to the wording of the motion. It’s good to challenge bad ideas, but when you do it over and over again to the same person’s efforts, it sure looks like the matter is a personal one.

Councillor Bertram was apparently the first Councillor in the history of North Grenville to bring forward a motion of his own. That fact alone is alarming. Councillor Bertram has brought forward a number of motions and resolutions since then. With all of the effort and commitment that he’s putting into his role as Councillor, it’s difficult to understand why another member of Council would be so opposed to a fellow Councillor who’s trying to make a positive impact on both residents and the Municipality as a whole.

I, for one, appreciate Councillor Bertram’s efforts, even though sometimes I think his aim might be a little off on some things. No matter, he’s putting in the time and effort to try and make a difference. I look forward to other members of Council being inspired and stepping forward with motions and resolutions of their own over the next year and a half of this Council. Maybe Deputy Mayor Tobin could bring a motion forward and see what kind of reception it gets. I wonder if it would be the same as what she gives?

Letter to the Editor – Jim Bertram 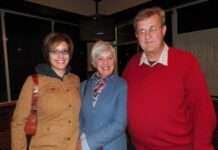