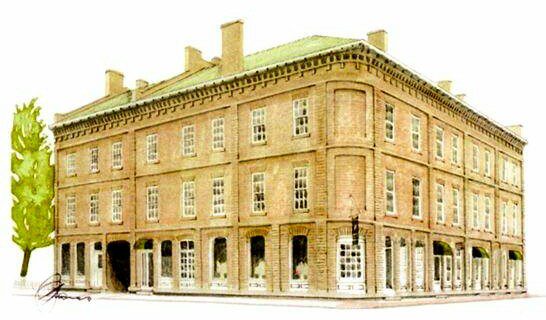 On June 3, 2017, my partner Michael and I joined Peggy Holloway, former co-director of the Merrickville Jazz Festival (www.merrickvillesjazzfest.com) and her husband, to listen to Karen Oxorn’s show: ‘Celebrating Canada’s 150th in Song’. While Karen, the former artistic director of the Jazz Festival, sang, we enjoyed a three-course meal in the dining room of the Baldachin Inn (www.baldachin.com). I marvelled at the building in which she was performing.

My curiosity piqued, I sat down a couple of weeks later with Dave Ellis, the Baldachin’s owner. He told me that when the Baldachin was built in 1860, it housed the largest department store between Chicago and Montreal. The Baldachin overlooks the historic Rideau Canal Waterway. Because the Rideau Canal was one of the region’s main modes of transportation when it opened in 1832, it provided customers for the thriving department store. Designated a UNESCO World Heritage Site in 2007, the Rideau Canal is now used by recreational boaters.

One of the most interesting features of the Baldachin building is its third level, a ballroom with 15-foot high stonewalls and hardwood floors. Large enough to seat 200, the ballroom is completely open, free of vertical supports. The King’s Truss system that was used to accomplish this is a unique style that is only found in one other building in North America. Situated in Chicago, that building is still in use. In the 1800’s and 1900s, the ballroom had been a Millinery, where hats were designed and made for the fashionable women. The smaller room next to the ballroom was a dressmaking shop, the size difference of the shops reflecting the buying trends of the time. While women usually sewed their own clothing, they pampered themselves with a new hat as the seasons changed. In the early 20th century, when Harry McLean, a railway builder and eccentric millionaire, owned the building, legend has it that he used its ballroom’s large open space as a tennis court.

For 75 years, until the Depression, the Baldachin remained the largest department store in Canada. The historic community of Merrickville was inactive during the 1970’s, and the building fell into disrepair before part of it was opened as a dining room in 1987. In the spring of 1988, the building was purchased by Dave Ellis, who restored the entire building over the ensuing 29 years. Dave estimates that the Baldachin ballroom is rented 20 to 30 times a year for weddings, receptions, and conferences. The building also has seven guest rooms. There are two other stores in the building. One of them, the Knock Knock Shoppe, has been a tenant for almost as long as Dave has owned the building.

Dave has made alterations over the years, recognizing that the Baldachin must evolve as its customers’ needs change. Dave has removed a wall that, until a couple of years ago, separated a more formal dining room from the pub area. The menus are now the same on each side of the bar, reflecting a decreasing demand for fine dining. There is a patio behind the restaurant, open from May 1 to mid-October.

Dave is preparing for his busiest time, the last weeks of July to the first couple of weeks in August. However, throughout the summer boaters, stop in Merrickville for the night, some on a two-week trip from Montreal that takes them along the Ottawa River and the Rideau Canal to Kingston, then up the St. Lawrence. If they stop in at the Baldachin, they’ll meet Dave Ellis, who’s always there from noon to five pm, seven days a week. 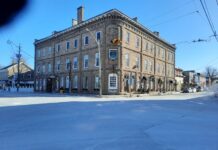 Floor collapse at the historic Baldachin