It was revealed in December that Wellington-Dufferin-Guelph Public Health is justly concerned about water pollution by potential new gravel pits that penetrate the water table. That organisation is taking a stand to protect local drinking water and municipal autonomy. Good for them!

As was reported at Orangeville.com: …public health staff are calling on members to send a letter to the Minister of Natural Resources in opposition to a proposed change to the Aggregate Resources Act (ARA). Currently, the province is proposing to waive municipalities’ right to regulate the depth of a local mine or quarry in their zoning bylaws.“Households on private water may be at greater risk,” wrote staff in the report, adding that municipalities with greater numbers of gravel pits may be greatly affected.

This is the same Aggregate Resource Act that permitted the newly-opened aggregate pit on Bennett Road in North Grenville to come into being over the last 8 years. A pit that was resisted strongly, and for good reason, from 2011 to 2018 by the community in that part of North Grenville. While working to build the Rural Summit in January, 2018, I testified at the last OMB hearing on the subject of the Bennett Road pit.

Having been involved in the pit fight from the beginning, as a new Councillor in 2015 I had to declare conflict of interest and leave the chamber when matters pertaining to the Bennett Road pit came forward for discussion. As it happened, I live in the area of influence of the Bennett Road pit, and the risk of conflict of interest stemmed from that fact.

But now I am no longer a public official with perceived potential conflict of interest. I am returning to public discussion of this type of issue. I would remind readers that while pits are necessary within our economic framework, their placement should be a matter of serious concern from all levels of government, as well as citizens. First of all, ecological concerns, such as noxious impacts on wetlands and wildlife, are a great concern, as large expanses of rural land are devoted to these mining operations.

Impacts on human populations are also significant. The team with which I worked in the South Gower region of North Grenville elaborated a series of potential negative impacts on people living within the “influence area” of the new pit on Bennett Road. These included damages to personal health and property caused by blowing sand; damage done to the visual environment of the neighbourhood; threats to water quality, or even availability – note that hundreds of homes in the influence area of that pit are served by well water. And, as outlined in Ben Lansink’s leading research on the financial impacts of aggregate pits, it is apparent that property values in the vicinity of newly imposed pits decline quite sharply, a matter of great interest for the people affected. Briefly put, the impact on the financial situations of neighbours of pits is a great concern.

I will conclude by stating that Ontario law allows for no meaningful opposition to these mining operations by local residents or municipalities. And the situation stands to get worse under the current provincial government. I personally brought this situation to the former Liberal government of Ontario, all to no avail. At that time, I and my group did, however, receive support from Conservative MPP Steve Clark, who actually raised the matter on the floor at Queen’s Park. A member of his office came to meetings held by my opposition group and gave us valuable assistance. Much appreciated at that time.

So, I would publicly prevail upon Mr. Clark to break open the file on the laws and regulations governing aggregate pits. He and his party are in power now and have a year of governing experience. His party states that it is “for the people”, and the party’s support is strongly based in rural or semi-rural areas like North Grenville, whose residents are at the biting end of the aggregate business: a business which provides low-cost aggregate on the backs of the rural population, whose health and financial well-being suffer from their imposed proximity to aggregate pits/mines.

My question: What will Mr. Clark do to even out the playing field between tax-paying rural citizens on the one hand and big government/big business on the other? Will he bring this issue to the floor of Queen’s Park this time? Will he revolutionize the Aggregate Resource Act to fit the needs of a modern, DEMOCRATIC Ontario? I really hope so, because another big pit is about to be foisted on the people of North Grenville, to the detriment of its neighbours who are also YOUR fellow citizens. Watch for it.

I believe the issue of this new pit will be coming to NG Council’s attention soon. No members of the current Council live in the affected area, so they will be able to intervene to the extent possible for local government without incurring potential accusations of conflict of interest. I hope they will use their influence in defense of the interests of local citizens. And if you, the reader, care about this problem, I hope you will raise your voice in support of those affected by such projects. 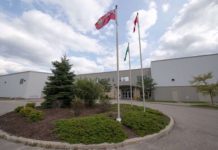 Mayor Peckford declares a State of Emergency for North Grenville

A community working together