The cairn in Deek’s Quarry on the Scotchline Road in North Grenville has been a forgotten by most for many years. The first such cairn to be erected by the famous engineer and entrepreneur, Harry McLean, it was a monument to the men who had been injured or killed while working in the quarry owned by McLean, which produced crushed rock to use as railway bed ballast.

In the first half of the last century, Deek’s Quarry was a hive of activity. At one time, around 200 workers were employed in crushing rocks to be used as rail beds for the Canadian Pacific Railway and the Ontario Northern Railway. McLean bought the land for the quarry in 1919 and the operation continued until 1932, and at its peak, almost three million tons of local limestone was quarried every year. The work was hard and dangerous and there were deaths among the workers. When the quarry closed, McLean erected the stone cairn in memory of the dead workers, one of around a dozen such memorials he built at various quarries he owned across Canada.

On the stone monument metal plaques were mounted carrying the names of the dead, and one side was placed a poem, “The Sons of Martha”, which McLean had received permission to use by its author, famous British Imperialist, Rudyard Kipling. But time was not kind to the McLean Cairn, and it remained neglected and vandalised for many years. The metal plaques were removed and some, at least, ended up in the care of the Historical Society in Merrickville. But the cairn itself became lost in overgrown bush and the memories of local residents until a few individuals decided in 2001 to see about moving it to Merrickville for preservation. The plan was to have it sited on the green space beside the cenotaph.

It was then that John Shawarna, one of those involved in the project, says they made their first mistake: they informed the Township of North Grenville of their plans. Meant as a polite gesture, it led instead to the North Grenville (Local Architectural Conservation Advisory Committee [LACAC] to recommend to the municipal council that the cairn be given a heritage designation, which would prevent it being moved to Merrickville. An appeal to the Ontario Conservation Review Board took place in July, 2002, resulted in some recommendations, including that the cairn should remain where it is in Deeks Quarry, and that it should be designated by by-law under part 4 of the Ontario Heritage Act. In the almost twenty years since the hearing, the site has not been designated .

But, at that point, it seems that everything stopped. The North Grenville council refused any financial support for the restoration, and would not agree to purchase the site from Barry Forbes. No tax receipts would be issued by the municipality for donations of materials to use in the project. In short, after all the effort, conflicts, and time, the cairn remained where it was, in its dilapidated state. In fact, the cairn became even less accessible when the Municipality of North Grenville closed that part of Scotch Line Road to vehicles a few years ago, so anyone wishing to see the cairn had a bit of a walk to get to it. In addition, the cairn is now in a very sad state, easy to miss as you walk along the road, and apparently destined to simply fall apart in time.

Over the years, the cairn has been used for target practice by shotgun owners, and the stonework has become dilapidated and there is a real danger that the cairn itself could simply fall apart unless something is done to save it. But now, presentations have been made to the North Grenville Heritage Advisory Committee, and the Merrickville-Wolford Council, to take action once again to implement the recommendations of the 2002 Review Board. John Ireland, Executive Member, Thousand Islands Chapter Professional Engineers Ontario, along with Teresa Barrett-Ryan, a biographer of McLean and a participant in the 2002 hearing, Dell Bower, who worked with Teresa on her book and was also a participant in 2002, and Jane Graham, Member, Merrickville and District Historical Society, made the presentations, calling on both municipalities to provide a Site Designation by By-Law under section 4 of the Ontario Heritage Act; develop a plan to provide necessary security to prevent further damage to the Cairn, for restoration of the Cairn in its present location, and for signage and tourism as identified in the report.

The entire topic of heritage conservation in North Grenville and Merrickville-Wolford is one that has been largely neglected by residents and councils alike in the past. There is still debate about the value of heritage, and whether it is right to spend taxpayers’ money on heritage buildings and monuments. But we are inheritors of what the past has left to us, and guardians of that inheritance for future generations. Communities without a history, or that are ignorant of their past, cannot hope to have an identity and tradition that sets them apart rom any other. Whether that is worth some attention, some financing, and some energetic labour is up to our political representatives and how they respond to public and private appeals for forgotten monuments like the Deek’s Quarry Cairn. 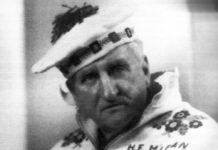 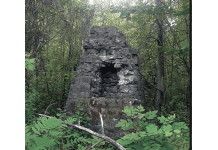