Thursday evening marked the first meeting of the North Grenville chapter of 100 Women Who Care, a group of women dedicated to raising money to benefit the community.
The initiative was spearheaded by North Grenville resident, Ashley Vincent, who heard about other chapters of 100 Women Who Care at work. “I was talking to a co-worker and they mentioned the Kingston chapter,” Ashley explained at the meeting. “Being a mom, I want to help make our growing community even better.”
The goal of 100 Women Who Care is to raise money, to go towards a local charity, every time they meet. Each person, or team of two to four people, commit to donating $100 at every meeting. Every $100 garners a nomination and a vote towards the charity which will receive the donation from that meeting. “The goal is to surpass 100,” Ashley says. That way they can have a significant impact, funnelling over $10,000 every time they meet into the local community.
The first meeting drew thirty enthusiastic women to Rideau Lounge and Castleview Fine Dining (formerly the New Rideau Restaurant). Cara Duhaime heard about the group on Facebook, and she and her mother, Anja Berends, decided it would be a good way for them to support the community where they work, shop, and play. “I think it’s phenomenal,” Anja says. “It’s a good way to get to know what charities are out there.”
In the end, the group voted to donate the $1,800 they raised to Community Living North Grenville. Carol, one of the ladies who nominated Community Living, says the money will be used towards supporting the programming that helps people of all ages in North Grenville with intellectual disabilities. Other local charities that were nominated included Kemptville District Hospital, and Big Brothers and Big Sisters of Leeds and Grenville.
The plan is to have three other meetings over the course of the year and, hopefully, attract even more community-conscious women to the gatherings. Ashley says she could also use all the help she can get behind the scenes. “If anyone has any ideas about how to make it better or smoother, I’m all ears,” she told the group on Thursday.
The next meeting will be on Thursday, May 11, at Rideau Lounge and Castleview Fine Dining. Registration will start at 6:30 pm, and the meeting will run from 7:00-8:00 pm. For more information and updates about the North Grenville chapter of 100 Women Who Care go to www.100womenwhocareng.com or follow them on Facebook. 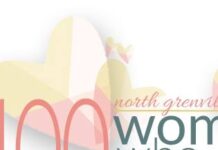 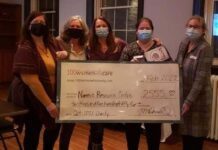