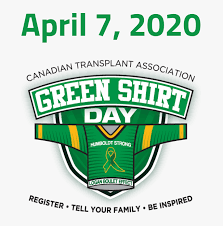 Fourteen-year-old Ethan Bos has been advocating for organ donation since 2019. He was inspired to promote Green Shirt Day in North Grenville and beyond by Logan Boulet, who was one of the Humboldt Broncos who lost his life in the tragic bus crash of April 6, 2018. His parents, Bernadine and Toby Boulet, offered to donate his organs, saving six lives on April 7, 2018. Logan had told his parents that he wanted to be an organ donor, to follow in the footsteps of his coach and mentor, Ric Suggitt, who passed away in 2017 and, also saved six lives with his donation.

Ethan, whose family has ties to the Boulet family in Lethbridge, Alberta, first started promoting Green Shirt Day as a grade seven student at St. Michael Catholic High School. Since then, he hasn’t stopped and has been making presentations to local councils every year asking them to proclaim April 7 as Green Shirt Day in their municipalities. Despite the COVID-19 pandemic, Ethan was able to reach out to councils in Merrickville-Wolford, North Grenville, Athens, Edwardsburgh/Cardinal, Front of Yonge, Westport, Rideau Lakes, Smiths Falls, Brockville and even Ottawa. All councils were very receptive to his presentation and proclaimed April 7, 2021 as Green Shirt Day in their municipalities. “Thank you as always for bringing this important day to our attention,” Mayor Nancy Peckford said after the motion was passed. “We really appreciate it, and we are very grateful for your leadership and dedication.”

According to Ethan, about 300,000 Canadians have signed up to be organ donors in the last three years, but there is still a long way to go. “There are a lot of people out there who don’t understand how important organ donation is,” he says. The Green Shirt Day website notes that 90% of people in Canada say they support organ donation, but only 32% have registered to donate. While donation rates have definitely increased over the last ten years, there are still about 250 people who die annually waiting for an organ transplant. “One person can save up to six to eight lives and improve the lives of 25,” Ethan says.

The gratitude from Logan’s parents keeps him going back to municipal councils every year to advocate for organ donation in the community, he added. Although he is not yet old enough to sign his own organ donor card, it will be one of the first things he does when he turns 16. For now, his goal is to help get another 200,000 people to become organ donors in the next year. As Logan would say: “Live Life. Pass it on.”