I’m not sure when it happened. One day, I looked in the mirror and the face staring back at me was that of my grandfather. Not really, you understand; it just looked so much like him that it kind of shocked me. That was a pivotal moment. Another one was when it hit me that seniors were no longer “them”, they were “me”. I think it was getting monthly payments from the feds and province that made it real. CPP, OAS, and such acronyms appeared in my bank statements. Even the bank statements were a rather large reminder: my account is called “Everyday chequing with Seniors Discount”!

It seems the universe is insisting on telling me that I am no longer in the first flush of youth. The universe really doesn’t need to shout it so loudly. My aching body, failing eyesight (failing? It has passed fail and been expelled from school), and a myriad of other subtle hints have made it very clear indeed that my days of youthful exuberance are a fast-fading memory.

This is not all bad, of course (those monthly government subsidies are a bonus). I have reached an age when I can be, as my dear wife called me the other day, a genuine curmudgeon. I say “genuine” because, to be honest, I’ve been a curmudgeon for quite some time now. But at last I have an excuse. We seniors can tell younger ones to deal with it, when we come across as a little crusty and grumpy. I have yet to use that phrase I used to hate so much, “when I was your age….”, but I’m sure the opportunity to say it is fast approaching.

There’s so much to remember with gratitude about being this age. We were the Baby Boomers (I arrived towards the end of that generation, of course…), a title I find so much more friendly and apt than Generation X (or Y or Z, or whatever), or Millennials. Let’s face it: we had the best music, the sunniest summers, the deepest thinkers, the hippest rebellions, all you’d ever want in life. Yes, I know, most of that is not quite true, except for the music bit, but I can’t imagine living in a more exciting and optimistic period. Well, until Nixon turned up, anyway.

There’s a strange sense of perspective at this age, and a rather stunning one too. When I was twenty, let’s say, World War II was thirty years in the past. For someone who is twenty today, thirty years in the past was 1991. But that was yesterday! I mean, I remember that year as being recent, but WWII for me in 1975 was ancient history. Do you see what I mean? Perspectives change.

I was reading an article the other day about how the current generation of children (5 to 15 years old, say) live in a world where technology has changed so much that they have no experience, or even sometimes no knowledge, of things like pagers, rotary phones, cassette tapes, and a host of other things that were a major part of life for my generation. But things that were special to my parents’ or grandparents’ generation are not strange to us. We grew up hearing and seeing them, watching black and white movies from the 30’s and 40’s, and seeing a different world in them. I can remember black and white TV, even watching old Laurel and Hardy, or Charlie Chaplain films.

It’s hard to grasp how fast everything has changed so recently, at least in my recent past. As a student, in about ten years I went from writing on an electric typewriter (which was revolutionary at the time – you could change fonts by using different golf ball-type things) to a mainframe computer in university, to a desktop PC that had apparently unlimited potential. When I first got an email account, I couldn’t use my full surname on it, because the system couldn’t handle anything longer than a few characters.

Yes, much has changed and much has been left behind, for good or ill. I am now a senior, although writing that seems ridiculous and I feel a bit of a fraud. After all, I can’t really be a senior, can I? I mean, rock and roll, right? I may not be able to party all night long, but I still dig the music. There’s still so much about me that just doesn’t feel like a senior, whatever that is supposed to feel like. Maybe that’s it. Maybe this generation of seniors has simply changed the way seniors are, a new perspective, a new interpretation, of what that word means? Perhaps we really did achieve something and the times they are a-changin’. After all, we did invent the teenager, right? Why not reinvent the senior?

When I look in the mirror and see my grandfather looking back at me, I can smile and think of all he went through: two world wars, a great depression, a revolution in culture, technology, society. I do smile at that image of John Hamilton and I can only hope that I will do him justice as a senior, as he did in his time. Rock on! 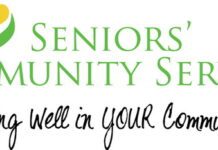 Tea Cups n’ Wicks and the Diners’ Club at SCS