Congratulations to Isabelle Nadeau and Bella Sadler, they were the lucky winners of the basket donated by To Be Continued, during the Downtown BIA Christmas. The “Elf On The Shelf” promotion asked people to go to 10 locations that were on the special “Elf”map and write down what the elf was doing at each one of those locations.

Isabelle and Bella, along with friends Zoe, Natasha and Reanne, went from place to place and managed to win the Gift Basket. It was actually Isabelle’s name on the ticket that won the basket, but she is sharing it between all five girls. Shelley Mitchel, owner of To be Continued, donated the Gift Basket, and she is shown (centre) with Isabelle and Bella. 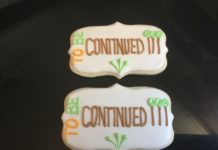 To Be Continued continues

Shop, Save & Celebrate at To Be Continued!