On November 15, the Salvation Army started their Christmas Kettle campaign; but, before that, I signed up to help where and when I could. I was not able to commit to a firm schedule because of various medical appointments for my wife and I, so I told them I would do what I could. They have an on-line schedule that I can check each morning and, if they have a need in a time slot that I can manage, I put my name in.

The Salvation Army helps many, many people; but their focus is to help one person at a time. Along with the Kettles, at this time of year they have, in conjunction with the North Grenville Community Church and volunteers throughout the community, the Fill-A-Bag campaign. This brought in over 2,000 bags of groceries that stock the Food Bank and also aids in providing a complete Traditional Christmas Meal for people who register for this program. How great is that?

While at the Kettle, I have heard “Are you guys out already?”, “You guys are everywhere”, or “Don’t you realize that most people don’t carry cash?” November 15 does seem early, unless you stop and realize that they need the money before Christmas because it is needed to provide a “Christmas” for those of our community that do not have the resources to provide it for themselves. We do try to blitz the community, because the Army needs every dollar they can raise to help others.

The Salvation Army has heard the comment and is aware of the changing population that does not carry cash the way they used to, and that is why they now have the ability to accept donations and print a receipt instantly for the donation made by debit or credit card. I point this out if given the chance, but most people make the comment in passing and are gone out the door before I can respond. Some people are overjoyed to see that this option is now available to them.

Others deliberately look away and do not look at the person giving of their time to man the Kettle. I am not sure why they do that, but, if they look at me, they will not be asked for anything. I will give a pleasant greeting and, if they have small children with them, I will ask if the child can have a candy cane. I won’t be offended if they, for whatever reason, do not make a donation. That is their decision, and I accept it. The people that volunteer their time at the Kettles are just ordinary people, like you or your neighbour, who want to help make a difference in somebody else’s life.

As to my support of the Salvation Army, I have heard some amazing stories of love and compassion from my family and others about the Salvation Army. One is from my mother, in her own words (she was about 10 years old and living in Timmins during the events she is talking about. At the time, her father had died in a mining accident about two years earlier): “During the year 1926 – 1927, my Mother was bedridden and confined to a screened-in veranda off our house, and the only contact we had was through an open window – this was the treatment for tuberculosis at that time. It was probably very hard for her; but Uncle Mac provided a very kind, competent house keeper, who did his very best to provide us with food and clean clothes and kept life going quite well.

One of my tasks was to clean my Mother’s dentures, and she always warned: “don’t you dare drop them – hold them tight”. Well, one day, I held the lower ones too tightly and broke them in half. I was so frightened I couldn’t take them to her, so I just stood in the kitchen with them in my hand and cried and cried – I felt this was the end of me. A knock sounded on the door – it was the Salvation Army bringing the War Cry. She put her arms around me and, between sobs, I told her what I had done. She went in and talked to my Mother, and then came out and told me she could get them fixed and everything would be alright. I didn’t know until years later that she had got them fixed at her own expense. I had a friend – she always came and brought the War Cry and always made me feel that she really meant it when she’d say ‘you’re a nice little girl’”.

The other story, much shorter, is from my Father who was in the engine room in the RCN during WW II. He always supported the Salvation Army because he said, during that time when they made it to port, they could always count on the Salvation Army being there to meet the ships with chocolate, cigarettes and, best of all, warm homemade wool socks. He said those kindnesses meant so much to the sailors during that terrible time.

I hope this will help you realize the wonderful good that the Salvation Army does in our community. Merry Christmas. 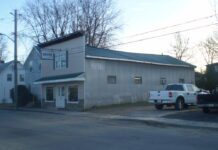 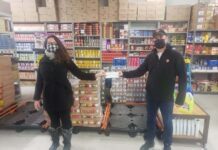 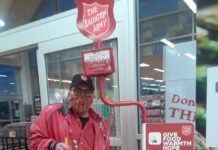 Salvation Army needs a tap from you