North Grenville has had a dedicated PSB ever since the OPP took over policing in the new municipality following amalgamation. The Board consisted of members of Council and civilian members representing the community, while the Province, through an Order in Council, appointed two provincial appointees. Under the Police Services Act R.S.O., 1990, where the municipality has contracted with the Ontario Provincial Police for policing, the PSB’s responsibilities include participating in the choice of, and monitoring the performance of the Detachment Commander, overseeing the contract for service between the municipality and the OPP, receiving monthly performance statistics of crime and prevention initiatives and preparing a business plan.

The North Grenville PSB has been very effective in negotiating better conditions for the Municipality in terms of the costs and level of service, and even the number of OPP officers provided to residents. However, a new piece of legislation passed by the Province in 2019, the Community Safety and Policing Act, will centralise many of the boards currently operating in Ontario, and that means that NG may no longer have its own PSB to look after local policing matters. Under the Act, plans were made to have just one PSB for each police detachment area, and that might have meant a single PSB for all of Grenville County.

In 2019 and 2022, Mayor Peckford and former Chair, Don Sherrit convened a meeting of local mayors and PSB members who agreed to appeal against this change, and the most recent proposal put forward to the Province would have a number of PSBs in Grenville County: North Grenville would share a PSB with Merrickville-Wolford, Augusta with Edwardsburgh/ Cardinal, and Prescott would have its own PSB. This would be far more practical than the original intention under the Act, but the problem is that the Act has yet to be implemented, meaning that the NG PSB is operating within an uncertain context, and the resignation of two of its more experienced members, Don Sherritt and Bruce Patterson, has meant that the Board has been reduced to just three members, Mayor Peckford, Councillor John Barclay, and resident Gregory Brown. Councillor Barclay pointed out to the Times that the situation has been one of uncertainty.

“The Province has chosen not to appoint Provincial reps to North Grenville’s PSB at this time and would only do so under extreme circumstances like being unable to achieve quorum, we are told. The transition to the new act is taking much longer than anticipated. We still haven’t been informed of the composition of a new detachment Board.”

A decision on how the local mayors wanted PSBs organized within the Grenville detachment had been expected from the Solicitor General last January, but it was delayed even more by the election and the naming of a new Sol-Gen in the reformed cabinet. So far, no decision has been forthcoming on the matter. This is further complicated for the North Grenville community by the plan to impose a prison on the Municipality, and the uncertainty about how much local policing costs will be affected by services to the new facility. As the PSB is responsible for negotiating policing costs and level of service for its area, the lack of clarity about the composition and responsibilities of the boards under the 2019 Act makes it difficult to know what input, if any, the Board will have on the costs of the new prison.

Mayor Peckford and Councillor Barclay, as members of the NG PSB, have made it clear that any increase in policing costs occasioned by the prison would be opposed strongly. John Barclay made his position clear in a statement last year: “My support for the correctional facility is really conditional on the continued dialogue with the Solicitor General aided by MPP Clark and having constructive positive conversations with them so that our investment in tourism, in the revitalization of downtown Kemptville, in our economic support for small business isn’t undermined. It’s really conditional on going forward and how we resolve some of these concerns as they are expressed by the community.”

Mayor Peckford informed the previous SolGen, Sylvia Jones, in a letter last December that: “Our community is seeking a commitment from your Ministry that North Grenville taxpayers will not shoulder any policing costs, should they arise as a result of the new correctional facility. Bearing these costs on behalf of this facility is not a responsibility that the Municipality of North Grenville should be expected to absorb – and we have no intention of doing so. It is critical that we have confidence from the start that any and all costs related to the design, construction and operation of the facility including policing costs will be borne by the Province, as stated from the outset”.

Mayor Peckford announced that she has arranged a meeting with the newly-named Solicitor General in August at the Association of Municipalities of Ontario Conference in Ottawa and Council plans to emphasise these positions at the meeting.

Don Sherritt, who resigned as Chair of the PSB last year, has continued to express his concerns that increased costs to the municipality involved in possible policing will be, at least in part, downloaded to the Municipality’s residents. “It is obvious that the Province is attempting to reduce the cost of policing the facility, but, unless there is a policy change impacting all 24 prison towns, NG will end up paying something to police the facility. That is today’s reality and a fact that is widely known by the residents of NG. I do believe that Council should be asked to provide an update on their ongoing discussions with the Solicitor General regarding the policing cost of the Kemptville Correctional Facility”.

It seems that there needs to be an even greater united front to ensure that, first of all, NG will have a more locally-based PSB, and secondly, that the PSB will be in a position to protect NG residents from increased policing costs, including those that may arise in the event of a facility operating in the Municipality. 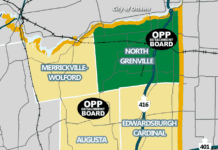 Police Services Board for North Grenville

Uncertainty over future of policing board