What would you do if Canada Post, other delivery agencies, friends, and possibly even emergency services personnel, were having trouble finding your home? That is the problem being faced by local resident Dave Smith, who lives on the boundary line between North Grenville and Ottawa. Dave talked of how, when the City of Ottawa expanded by amalgamating with a few surrounding municipalities, they needed to replace duplicate street names to avoid confusion.

“The old Gloucester Municipality out by the town of Russell in the far east end had a road called Boundary Road, and that name was kept,” said Dave. However, Dave also lives on a “Boundary Road,” though he believes his road had its name legally changed to “South Gower Boundary Road” after the amalgamation. “Someone forgot to tell North Grenville the name was changed,” he said.

Dave contacted North Grenville’s Public Works Department last summer, and he acknowledged that the official was helpful, though he did not get the answer he was expecting – he was told that the legal name for his road is, indeed, just “Boundary Road”. Dave believes that it is the Municipality’s responsibility to get in touch with officials from the City of Ottawa to get this issue sorted out. A major tipping point for him was when his neighbour broke his hip last spring, and the ambulance took almost 30 minutes to arrive, he alleges, because of confusion caused by Google Maps.

Cheryl Fequet, the same official with whom Dave spoke in the summer, responded to a request for comment, insisting that the legal name of Dave’s road is “Boundary Road”. She also confirmed that there is no road called “South Gower Boundary Road” in the fire dispatch system, and that Google Maps is an independent map tool that is not linked to the dispatching of emergency services.

She confirmed that she consulted with the Fire Chief, as well as Director of Public Works, Karen Dunlop, when gathering the information.

But Dave has one more point to make. “Even the federal government got it right,” he said. “They sent my census survey to South Gower Boundary Rd.” Until he gets some answers, Dave is sure to keep asking questions. 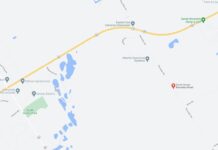