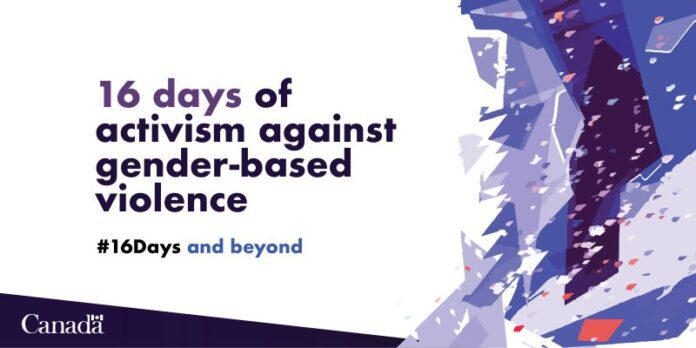 The 16 Days of Activism Against Gender-Based Violence is an annual international campaign that kicks off on November 25, the International Day for the Elimination of Violence Against Women, and goes until December 10, the World Human Rights Day. 2021 marks the 30th anniversary of the campaign.

The International Day for the Elimination of Violence Against Women, November 25, was designated in 1999 by the United Nations General Assembly. The date was chosen to commemorate the lives of the Mirabal sisters from the Dominican Republic who were violently assassinated in 1960. The day pays tribute to them and urges global recognition of gender-based violence. Each year on this day, governments, international organizations, and NGOs are invited to organize activities designed to raise public awareness of the pervasive issue of gender-based violence and its devastating impacts on individuals, families, communities, and society as a whole.

The 16 Days are an opportunity to come together as Canadians, and with partners around the world, to call out and speak up on gender-based violence and to renew our commitment to ending violence against women, girls, 2SLGBTQQIA+(two-spirit, lesbian, gay, bisexual, transgender, queer, questioning, intersex, asexual, plus ), and gender diverse individuals. In Canada, we also observe the National Day of Remembrance and Action on Violence Against Women, remembering the women who were murdered during the tragic mass shooting at Polytechnique Montréal on December 6, 1989.

What is gender-based violence?

Gender-based violence during the COVID-19 pandemic:

We all have a role to play in creating safe homes, schools, workplaces, and communities. Now, more than ever, collective action against gender-based violence is needed, as we navigate the evolving COVID-19 crisis. The COVID-19 pandemic has highlighted gaps in the very systems designed to keep people safe. It has created unprecedented challenges for those experiencing gender-based violence and the organizations that provide supports and services to them.

The stress and anxiety resulting from the COVID-19 pandemic and the necessary physical distancing measures was a top concern for many Canadians in early April 2020. One in 10 women reported being very or extremely concerned about the possibility of violence in the home.

In addition, young women between 15 to 24 years old were substantially more likely than young men to be very or extremely anxious about violence in the home (12% versus 8%, respectively). Gender-based violence service providers reported several changes in demand for services over the course of the COVID-19 pandemic.

The Ontario Association of Interval and Transition Houses (OAITH), a network of more than 70 shelters, reported a 20% increase in demand for intake between March, 2020, and September, 2020. The Assaulted Women’s Helpline in Ontario reported a 65% increase in calls between October and December 2020 compared to the same period the previous year.

The Battered Women’s Support Services hotline, located in British Columbia, reported a 400% increase in calls between April and May 2020. Early data indicated that 40% of those calls were from people reaching out for the first time.

In November 2020, Women’s Shelters Canada released a survey containing responses from 251 shelters and transition houses that serve women and children affected by violence. 61% of shelters reported that calls to the shelter increased between June and October 2020. The pandemic also affected their ability to provide services to those affected by gender-based violence: 71% of shelters reported having to reduce their capacity to meet public health regulations during the pandemic, and the majority of shelters stated that they faced staffing challenges during the pandemic.

Although that police data does not show the full picture because many survivors do not access police services for violence, and lockdown measures have made it more difficult to do so, data from a sample of 15 police services in Canada show that calls related to domestic disturbances increased at different stages of the pandemic.

These calls reached their highest volume between May and August, 2020, when they were 8.6% higher than the same period in 2019. Between March 2020 and February 2021, there was a 20% decrease in calls for service for sexual assaults when compared to the same time period 12 months prior.

The 16 Days is an opportunity to come together to address injustices and take immediate action to create safe homes, communities, and workplaces for everyone. Between November 25 and December 10, we invite you to join the conversation and reflect on the immediate actions you can take to end gender-based violence.