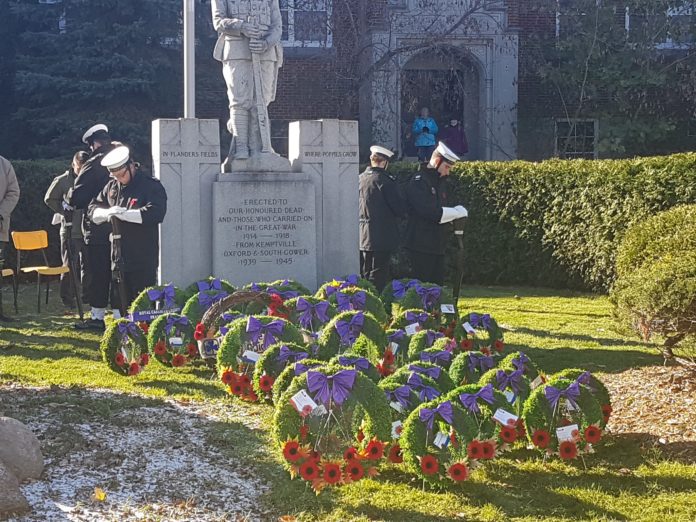 Perhaps the most important aspect of Remembrance Day each year is that we remember them. Them, not the various battles and wars and incidents, but them, the ones who went from here and the ones who did not return again. This puts the responsibility on each generation to remember, to ensure that their community can remember clearly and accurately what and who have gone before.

That is why, each year, the Times has published a special issue for Remembrance Day. By bringing to mind individuals, their stories, their pictures and their individuality, we can understand better what they did and why. For decades, Remembrance Day was centred on emotional things, like the often-used poem, “In Flanders Fields”, with its threat that “If ye break faith with us who die, We shall not sleep, though poppies grow In Flanders fields”. Perhaps their sleep will be most peaceful if we can remember them and decide never to repeat their experiences again.

Today, we remember the humanity of those who served, understanding, possibly better than ever before, the real cost to all who put their lives on the line. That is why they should be remembered: because they were just like us, came from our communities, knew our streets and country roads. Whether you agree, or disagree, with their going out to fight, we must remember them.

This is a strange anniversary year. On the one hand, it’s a century since the soldiers began to return home after the Great War. But they also brought with them the Spanish Influenza which decimated nations around the world: more than 20 million people. 1919 saw this scourge sweep through North Grenville and Merrickville-Wolford, and we give space to remember that dreadful plague.

Twenty years later, another Great War broke out, but Canada had changed in the interim, and that is also covered in this issue. On next Sunday, November 10, there will be a special event taking place at the Kemptville Legion, to which everyone is invited. Roy Brown has put together a presentation on those who are named on the Cenotaph, and especially on Robert Barr, the most decorated soldier from this area in the First World War.

Great thanks should go out to Roy Brown for the hours of work he has put into collecting biographical and service data on those whose names are listed on the Kemptville Cenotaph and providing the records to the North Grenville Historical Society to preserve them for coming generations.

There are not too many occasions in the course of the year when history is brought home to so many of us; when our past can come alive and we honour and acknowledge our heritage. Remembrance Day is one of those times. This year, then, we remember them, the individuals who followed the way as they saw it before them, regardless of the cost. We will remember them.