There is no doubt that the COVID-19 pandemic has wreaked havoc on local small businesses. With the most recent stay-at-home order, and government restrictions on how they can operate, many owners are struggling to keep their businesses afloat. According to the Canadian Federation of Independent Business, one in six Canadian small businesses are seriously considering closing permanently, putting 2.4 million jobs at risk across the country.

As part of a series The North Grenville Times is reaching out to small local businesses to find out how they are coping with the second shutdown and a future of unknowns. Although no businesses that we have talked to so far are contemplating closure, many are stressed and overworked because of the closure, or partial closure, of their businesses. 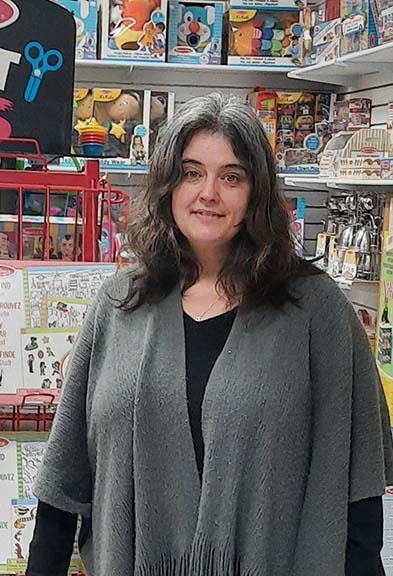 Shelley Mitchell is the owner of the consignment store, To be Continued, in downtown Kemptville. The store has been part of the fabric of the downtown business community for 12 years, offering used clothing and accessories, as well as new toys and party paraphernalia. Shelley says this shutdown has provided a unique challenge for her business, as she has a store full of people’s winter items that she won’t be able to sell. January is usually a slower time for the store, but it is also a time when they are trying to clear out their inventory to make room for summer stock.

“How do I ethically give my consignors the opportunity to take back what didn’t sell because I’ve been closed for, who knows, two months by then,” she says. “And then how do I get in product, because I’m consignment. I don’t just order stuff. I’m worried about those things. About meeting my commitments to my consignors and my customers.”

Shelley had to lay off all her staff after Christmas, and she is now working a few hours a day at the store doing curbside pickup. While she is doing her best to make things work while still looking after her home-life, revenues are down significantly. “For the first time in twelve years, our revenue is not going to pay the rent, never mind any of the bills. March hit me as a surprise, January doesn’t. But that’s not the point. The point is that, as a business, creating that kind of pattern is just lunacy.”

Shelley is worried that the pandemic will have created a new consumer pattern, with so many people relying on big box stores and Amazon for their purchases. “Brick and mortar retail may not bounce back. There are other options and people are using them.”

To be Continued has a website, but not an online store. To support them, you can either call the store, or message them on Facebook if you are looking for anything in particular, or would just like to know what they have in stock. “[Balloons] are really our lifeline,” Shelley says. “And a great way to keep special occasions special.”

Shelley is also worried about all local small businesses, especially restaurants, which rely on in-person dining to make ends meet. Salamanders, just a stone’s throw away from To Be Continued, has also been struggling through the shutdown, especially since they aren’t set up very well to offer take-out. “We hate being run over by a Ford all the time,” says owner Paul Cormier. “Business is closed.”

December is usually a very busy month for the restaurant, but with no Christmas parties, and the lockdown starting on Boxing Day, they have lost all that revenue, which they likely won’t be able to make back. “It’s pretty stressful,” Beth Cormier says. “There are relief programs that we have applied for, but it doesn’t come close to covering five months of shutdown.”

While the staff at Salamanders are trying to stay positive, both Paul and Beth feel that restaurants like theirs have been treated unfairly. “The province is saying they’re using science-based information. They’re not,” Paul says. “They are reacting. If another jurisdiction does something, they go ahead and do it.”

Beth is upset that restaurants like Salamanders are being lumped in with other hot spots, like bars in big cities like Toronto and Ottawa. “I don’t think there is a lot of factual evidence that COVID is being transmitted through restaurants,” she says. “So that’s a little bit tough.”

Because of customer demand, Salamanders will be open for take-out as of February 4, and offering almost their full menu. They are also hoping that the province-wide lockdown will actually end on February 19, as announced, and that they will be able to welcome guests back into the restaurant, in some capacity, once again. “We are hoping that we will have an early spring and we can get the patio open and go from there,” Beth says. “That’s all we can hope for at this point.”

Elie Khalil of the Kemptville Family Restaurant is also hoping that he will be able to have customers back in his restaurant as of February 19. He says that they were just starting to see their revenues come back up from the first shutdown, when they were ordered to close indoor dining again. “With the shutdown right now, business dropped at least 75%. People are afraid to come out, and, with the stay home order, people are not ordering or leaving home like they used to.”

Elie says the stress of running a restaurant in these times has definitely had an affect on the family-run business. They are trying to keep as little in stock as possible right now, but they never know what orders will be like from day to day. Without being able to place big orders, many of their suppliers won’t deliver, forcing Elie to drive into Ottawa regularly to get fresh ingredients.

“We don’t want to run into the same problem that we ran into the first time. We had to throw lots of stuff in the garbage, because we are known for always keeping stuff fresh. Fresh food, fresh meats, fresh fruit, fresh soups, that’s what we are known for.”

Kemptville Family Restaurant wants to do their part to help fight the virus. Their staff undergo daily temperature checks, and when they were open, they had COVID screening for all their customers before they were allowed to sit down. That being said, Elie feels stuck between wanting to do his part, but also needing to pay his bills and support his staff. “It’s like you’re stuck in the middle. You have to fight, but every day you fight more, you lose more, but you have to keep up the fight. You can’t throw the weapon down now, in the middle of it, you must keep going. And that’s what we’re doing.”

Melanie Charlebois from the Bodhi Tree Yoga Studio is also working hard to keep her business afloat; but is trying to take things as they come. She says that, when they announced the shutdown before Christmas, she thought they would only be closed for a couple weeks; but now she isn’t even sure they will be allowed to reopen on the projected February 19 date. “It became pretty clear pretty quickly that that was not going to be the case, and that we were pretty much falling into the same situation as last time when nobody really knows. We’re all left in the dark.”

Thankfully, Melanie has been preparing for another shutdown since they were allowed to reopen in the spring. She has been able to pivot her business online, offering nine yoga classes a week through Zoom. She has also tried to keep up the retail side of her business by doing Facetime tours of her store for interested customers. While it is great that she is still able to offer something to the community, it is a one man show, as her insurance doesn’t allow any other teachers to teach through the Bodhi Tree virtually. “Right now it is a lot of work. But it’s a necessity in order to ensure we do stay open on the other end of this.”

Although revenues are down about 80%, Melanie is still keeping her spirits up. The most difficult part for her right now is not getting caught up in the overall feeling of anger and doom that is looming large over small business owners like herself. “It’s not to do about us personally. This is so much greater. So much bigger. And I don’t want to swim upstream against the current. I’m making that conscious choice not to swim against the current because, if I do, I will burn out and I will be too exhausted to reopen my doors when the time is right.”

Melanie would love to welcome students into her virtual classes, or give them a Facetime tour of their retail space. They are able to do contactless payment, delivery, and pick up, and are still open to any suggestions for items they would like to see in store. “Just connect with me. I’m here and I’m happy to help in any way,” she says.

Get your COVID-19 Fall Booster