Diversity has long been a strength of Canada – culturally, socially, politically and economically. What better time to recognize this diversity than the year of Canada’s 150th birthday? On July 5, 2017, the St. Lawrence – Rideau Immigration Partnership launched a campaign entitled ‘We Are Neighbours’. This community-driven campaign is aimed at recognizing and celebrating the diversity of individuals found throughout Leeds Grenville. Through a combination of social media posts, short online stories, print posters, and a community engagement display, the Immigration Partnership and its partners hope to inspire dialogue and connection among Leeds Grenville residents.

People of all ages, including business owners, immigrants, long-time residents, and students, will be featured in the campaign, each sharing personal opinions and experiences about living in Leeds Grenville. New campaign posts will occur every Wednesday until mid-December. From December 2017 until March 2018, a campaign display will travel to various public venues throughout Leeds Grenville.

To view the weekly posts and to learn more about the campaign, people are encouraged to visit the campaign website www.weareneighbours.weebly.com, or the St. Lawrence – Rideau Immigration Partnership Facebook page www.facebook.com/LGimmigration.

If local organizations are interested in becoming involved in the campaign, they can contact Vivianne White, Project Coordinator, St. Lawrence – Rideau Immigration Partnership, at [email protected], or 613.498.2111 ext. 261. 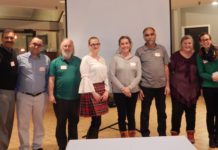 We Are Neighbours – John and Pippa, Merrickville