Veterans Way is a one kilometre secondary Municipal roadway within the Ferguson Forest Centre that links County Road #44 to Honour Way to the east. Stroll along Veterans Way and take a moment to pause and view the names and military service of local Veterans that are cast in commemorative bronze plaques and placed at the bases of trees lining both sides of the roadway.

The original concept for a “Living Memorial” came to the forefront when local resident Owen Fitz’Gerald, Past Chairman of the Ferguson Forest Centre Corporation Board of Directors, made a battlefield pilgrimage to Normandy, France. Owen was emotionally drawn to the many rows of graves and markers in Remembrance of the Fallen. The sight both haunted and inspired him, which resulted in his idea and recommendation for a tree-lined memorial roadway at the Ferguson Forest Centre.

On May 25, 2002, special guests representing various civil and military organizations, along with members of the general public, were in attendance at the official dedication of Veterans Way. A special plaque honouring military personnel who served during the First World War was unveiled and the first memorial tree was planted by the Leeds-Grenville Federal and Provincial Members of Parliament.

As of September 30, 2017, there are twenty-eight commemorative bronze plaques spaced along the Veterans Way roadway, which serve to recognize and honour thirty local Veterans who paid the Supreme Sacrifice or saw service with the Canadian, British and United States of America Armed Forces.

The Veterans Way Memorial Park is a special site of Remembrance and Reflection that was created to honour all those that served, and continue to serve, in the Canadian, British and United States of America Armed Forces. The Memorial Park forms part of the western gateway to the Ferguson Forest Centre and is located at the intersection of Leeds-Grenville County Road #44 and Veterans Way

The Veterans Way Memorial Park site is maintained by way of a mutual agreement with the Ferguson Forest Centre Corporation Board of Directors. In conjunction with the wishes of the Veterans Way Memorial Committee, the Ferguson Forest Centre Nursery Operations staff planted several large calliper trees and ornamentals as memorial tributes to those that have paid the Supreme Sacrifice.

Most recently, seven commemorative trees were added to the central area of the Memorial Park just north of the flagpoles: 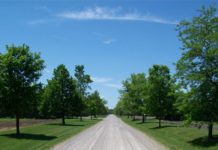