Twenty-one year old Ursa Meyer, of the locally band Fiddlehead Soup, suffered a sudden stroke in May of last year.

Following the stroke, the right side of her body was paralyzed. With regular treatments, however, Ursa has regained a great deal of mobility. Unfortunately, not all of these treatments are covered by insurance or OHIP.

At the forefront of Ursa’s mind, and journey of recovery, is music. Ursa says that “making music is part of my rehabilitation.” In the early days of her recovery at the Élisabeth Bruyère Hospital, Ursa’s friend, Sara Kreim, would manipulate Ursa’s then immobile bowing arm, while Ursa used her unaffected arm to hold and finger the violin.

Since then, Ursa’s physiotherapists have employed the same technique: not only does the movement target muscles affected by the stroke, but muscle memory from Ursa’s years of disciplined practice may trigger movement that would otherwise be unavailable to her.

Ursa explains that, “when we started this, I couldn’t make anything except awful squeaks out of my violin. And now, I’m making something akin to music. It’s nowhere near my ability as it used to be, but it’s progress; and it’s really heartening, because I could imagine a time in the future when I’m able to play by myself.”

There was, of course, a mourning period for the loss of Ursa’s ability to preform music. At the time of her stroke, she was enrolled in Bachelor of Arts in Music Performance at the University of Ottawa.

She has now switched her degree to a Bachelor of Music Education. Ursa has been teaching music for six years, but since her stroke she has been, “going into teaching music more profoundly.”

She is currently teaching children and some adults through the Tempo Drive Music Studio in Kemptville. In teaching, “I have found something which is so satisfying, so rewarding, so thoroughly enjoyable. Is it the same as performing? No. But it is equally rewarding.”

As for Fiddlehead Soup, Ursa has decided to put that project “to bed.” This was a difficult decision to make, but Ursa’s current focus is on her recovery, teaching music, and her academic career.

Ursa’s neurologists believe her stroke was caused by a malformed artery to the left side of her brain, which exploded at the time of her stroke. This indicates that Ursa is unlikely to suffer another stroke.

Her treatments have included physiotherapy to recover mobility, regular Botox shots to improve muscle tone and reduce pain, and massage. Ursa demonstrated the difference she feels in her movement and her abilities, stating that, “It really does bring about results.”

Her ability to persevere and stay optimistic, she credits to music. “I’m used to practicing a passage for weeks before I can notice a difference. That patience has benefitted me a lot that way.”

Her recovery has been long, but she has come a long way, from her wheelchair to walking on her own. She also refused to remain absent from her courses at University for longer than she had to, and she credits her recovered linguistic abilities to her determination to graduate. She is set to graduate next spring.

Of course, Ursa is also incredibly grateful for her family, her boyfriend David Gilliland, and the broader community for supporting her through this time. She explained that, without this support, she would have been faced with a decision between digging herself into debt, or considering her only semi-recovered right side “as good as it will get.”

The outpouring of support from North Grenville has allowed her to, “not have to make that choice. I’m extremely humbled and it really makes me so thankful. North Grenville is an awesome community. Everything they have done for me, it shows what big hearts they have.”

Her father, Marc, added that, “all the community outpouring has made it possible for us to concentrate on all the finer points of getting on with life, without that worry hanging over our heads.”

The North Grenville Times, in partnership with the Oxford Mills Community Association, will be raffling off an original framed watercolour by Marguerite Boyer, in support of Ursa’s ongoing medical needs as she continues to recover.

The painting can be viewed in the lobby of the B&H, and tickets are available from B&H, Bubba and Bugs, To Be Continued, Brewed Awakenings, and other stores across the area.

The draw will be held on September 20.

Just a song before I go 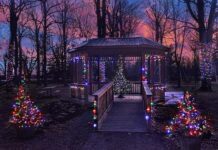 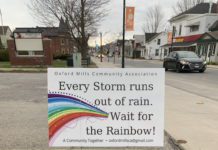